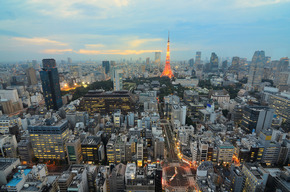 Mori said his company's acquisitions overseas will focus on properties whose values can withstand market downturns; The company may consider working with other investors in big cities such as New York and London.

"Property in a desirable location is good because it tends to be the last to drop in value when the market is bad," Mori said, referring to properties in New York City. "Cheap properties tend to be the first to decline and last to recover."

Mori, 76, said he wants to buy Class A office towers and also may focus on developing so-called smart buildings that are energy efficient and have disaster-prevention systems in place.

Miki Shoji Co., an office brokerage company, reported the office vacancy rate has dropped for four straight months in Tokyo to 8.7 percent in October, after rising to a record high in June, as excess supply decreased.

"Rent decline has slowed," Mori said. "The return from a building is higher than the cost of borrowing. With interest rates being very low, that makes it easy to buy."

Mori Trust, which has an occupancy rate of 95 percent for its buildings, plans to raise rents next year, Mori said.

The company will also be considering the acquisition of residential developers as it anticipates rising demand for serviced apartments and homes for the elderly, Mori said. A quarter of Japan's 127 million population will be older than 65 in 2014, compared with 14 percent in the U.S., according to data compiled by Bloomberg.

Mori Trust, which has refrained from purchasing to focus on strengthening its finances, has boosted its capital ratio to 26.3 percent as of March from 17.5 percent in March 2008, the year when global financing evaporated as Lehman Brothers Holdings Inc. collapsed.

"This is the perfect timing to invest," Mori told Bloomberg.  "We have continued to construct new buildings, but for the acquisition of buildings, our plan would be the first since Lehman went bankrupt."

The Japanese currency has strengthened 35 percent against the dollar in the past five years and is trading in the range of  81.90 yen per U.S. dollar.

Mori Trust manages 67 buildings in Japan, including the Tokyo Shiodome Building in a commercial district near Tokyo Bay, and operated about 30 hotels as of Oct. 1, according to the company's website.

The company made 16 billion yen of profit for the year ended March 31, almost double the net income generated by Mori Building Co., which was run by his older brother, Minoru Mori. Minoru Mori died March 8 from heart failure.

Mori is investing his own money beyond the property market.

MA Platform Group, a Tokyo-based company set up by Mori, became the largest shareholder this year in closely held Tsingda eEdu Corp., which offers English lessons over the Internet in China.