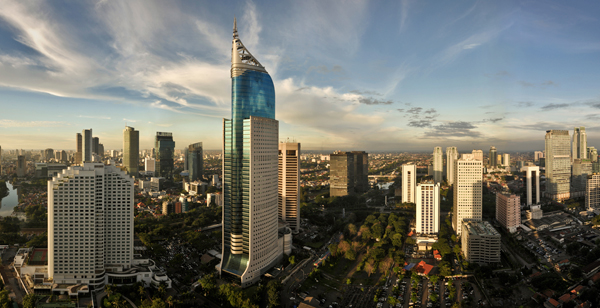 Jakarta, whose colorful postage stamps have enthralled stamp collectors for ages, is now being touted as the next virgin site for international real estate investors.

The Indonesian capital was ranked at the top of a five-country list expected to open a new frontier in global property investment.

The list and the report, Emerging Trends in Real Estate Asia Pacific 2013, was jointly published by the Urban Land Institute (ULI) of Washington, DC and PricewaterhouseCoopers (PwC).of New York City.

Other markets with high investment potential:

Asia Pacific analysts say it is understandable why Jakarta was selected as the market with the most potential for international investors. 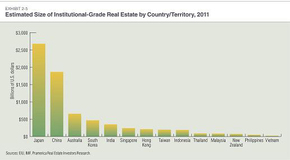 Located on the northwest coast of Java, Jakarta is the largest city in Indonesia and in Southeast Asia with a population of 10 million. It is Indonesia's economic, cultural and political center and ranks is the 13th most populated city in the world, according to Wikipedia. Until now, it has received little attention from big-name real estate investors. 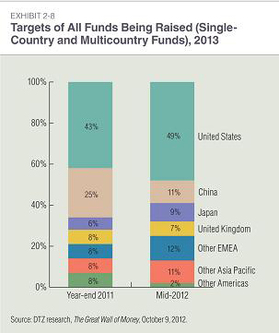 But concerns among investors that prime assets in key real estate markets in the Asia Pacific region are becoming overpriced are pushing a number of previously overlooked markets to their attention. As a result, the report finds that markets outside core cities are increasingly attractive for investment and development 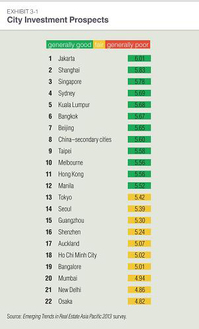 "As a result, investors are expanding their horizons as they seek compelling investment opportunities. Some are looking at frontier markets such as Indonesia, while others are revisiting often overlooked capitals such as Kuala Lumpur and Bangkok, which explains the strong showing for these locations in this year's report."

Price finds secondary markets such as Kowloon in Hong Kong and second-tier Chinese cities "are also experiencing increased interest from international buyers. At the same time, core investment markets in many mature, western cities are seeing a surge in demand from newly formed Asian Institutional Investors seeking to capitalize on the post-global financial crisis corrections there." 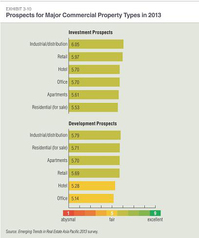 He says, "These alternative asset classes provide not only a measure of protection against cheaper local money, but they also are relatively sheltered from economic volatility.

"The logistics sector was mentioned favorably by several interviewees, especially in Japan, where distribution infrastructure has been reorganized in the wake of last year's earthquake, and also in China, where the requirements of domestic consumers, especially in the e-commerce arena, continue to outpace the capacity of local logistics networks that have traditionally been oriented towards meeting exporter demand." 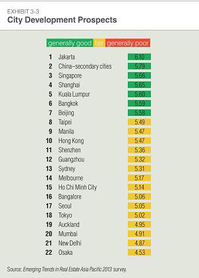 It is based on the opinions of more than 400 internationally renowned real estate professionals, including investors, developers, property company representatives, lenders, brokers and consultants.

The report is being released at a series of events throughout Asia that are being hosted in December by PwC and ULI Asia Pacific, which serves ULI's nearly 1,000 members in the Asia Pacific region.