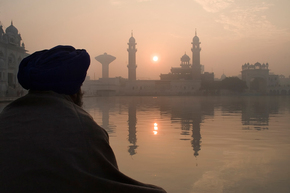 Moscow-based CMI Development, with a portfolio of $3 billion in global investments, is in talks with Punjab government officials to invest in the infrastructure of the Indian state, reports SupportBiz.com of Bangalore, India.

The publication reported CMI principals Boris Kiperman and Kirill Klimov have met with Punjab Deputy Chief Minister Sukhbir Singh Badal. The amount of the proposed investment and the category of real estate planned was not disclosed, although a government spokesperson in Chandigarh said it would be commercial with a potential value in the millions of U.S. dollars.

The spokesperson said that according to Badal, Punjab would invest about Rs.100,000 crore in the infrastructure sector and the execution of all the projects would be done by international companies.

The Moscow company told Punjab officials they are interested in  investing in Punjab because of  the state's current  focus on infrastructure development, according to the government spokesperson.

"CMI Development, with a portfolio of $3 billion in private investments, has executed some unique projects in Moscow," the spokesperson said.

The Bangalore publication reported Badal said the Punjab government will provide "all the support required by international investors who are keen on investing in the state."

Punjab is a state in the northwest of the Republic of India, forming part of the larger Punjab region. The state is bordered by the Indian states of Himachal Pradesh to the east, Haryana to the south and southeast and Rajasthan to the southwest as well as the Pakistani province of Punjab to the west.

It is also bounded to the north by Jammu and Kashmir. The state capital is located in Chandigarh, which is a Union Territory and also the capital of the neighboring state of Haryana.

Wikipedia notes that after the partition of India in 1947, the Punjab province of British India was divided between India and Pakistan. The Indian Punjab was divided in 1966 with the formation of the new states of Haryana and Himachal Pradesh, as well as the current state of Punjab. Punjab is the only state in India with a majority Sikh population.