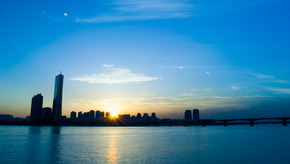 The good old days of buying real estate abroad in bulk are gone for most South Korean investors but they still continue to see growth opportunities in the U.S., according to the latest statistics from the country's Ministry of Strategy and Finance.

In the second quarter, South Koreans bought $53.7 million worth of real estate compared to $50 million in the first quarter. But the general pace of those acquisitions has slowed since the 2008 global financial crisis began, the government notes.

The ministry forecasts the country's overseas property purchases will increase to a limited extent in the near future due to the global economic slowdown and a slump in the U.S. real estate market, the major destination of South Korean overseas property buyers.

Retail investors purchased $52.4 million worth of overseas real estate, or 97.6 percent of the total, during the second quarter, with corporate buyers making up the remaining 2.4 percent.

The North American region was the most popular destination for the country's overseas property buyers in the second quarter, with about 90 percent of real estate being bought there.

The U.S. was the most popular market, attracting 80.4 percent of total investments.  Canada was next popular with a 9.5 percent share. China's Hong Kong  market drew 2 percent.