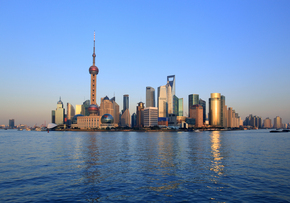 Shanghai, China's largest city by population (23 million) and one of the world's great commerce hubs now faces an uncertain future from major floods, according to a new study. Worse, the city has not taken heavy-duty measures to protect itself, the study warns.

Still recovering from three consecutive typhoons that hit the city in early August, Shanghai could be hit even harder from floods that could decimate the city's economic life in the coming years.

Shanghai is the most vulnerable to serious flooding among nine big coastal cities around the world, a study suggests.

Scientists from Britain and the Netherlands shared data for the study. The study was backed by the UN scientific agency Unesco and the Dutch government.

Full details appeared in Natural Hazards, a journal of the International Society for the Prevention and Mitigation of Natural Hazards headquartered in both New York City and Heidelberg, Germany.

The findings are based on a new measure called the Coastal City Flood Vulnerability Index.

The study found Shanghai is more at risk than other big cities, partly because of its physical exposure from a long coastline and the large volume of river water flowing through the city, Although a large population lives along the coast in flood-prone areas, the city has invested less than its European counterparts in various forms of protection, according to the study.

Nigel Wright of the University of Leeds in Leeds, West Yorkshire, England, notes. "A 'once in 100 years' flood in Shanghai would lead to widespread damage, with serious consequences for the city, across China, and through wider economic links for the whole world."  Wright was one of the study's authors.

The study also suggested that emerging economies in Asia faced bigger risks from natural disasters than European cities. For example, Dhaka is regularly hit by tropical cyclones and floods, yet, like Shanghai, it has few defenses in place. Manila and Calcutta are also highly vulnerable because of their large populations and degree of exposure to storms.

According to the study, the European cities of Marseille in France and Rotterdam in The Netherlands are also exposed to serious flood risks from storms, high river flows and numerous low-lying areas. But these cities have good flood management infrastructure and tight building regulations, so they are the least vulnerable, the study suggests.

"When a big flood hits, you will still get flooding but these European cities will bounce back quickly." said Wright said.

The method used by the researchers incorporates 19 components, including the level of economic activity in a city, its speed of recovery, the number of flood shelters and the awareness of people about flood risks. Other index components look at the level of administrative involvement in flood management.