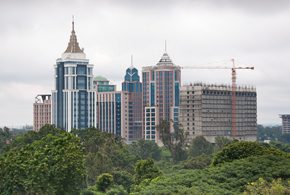 Regardless of the top two rankings, one startling fact emerges from the current online blogger interest in city rankings.  And that is the Indian economy is growing tremendously. This growth has led middle and upper-middle class residents to enjoy unprecedented large incomes and local power.

India already is home to a large number of billionaires driving luxury cars and using the latest in high-tech communications equipment.

OMGTOPTens.com argues these are the 10 most expensive cities in India:

Delhi, the capital of India, is the largest metropolitan area and the largest commercial center with an estimated SDP of Rs.157,817 Crores. Delhi is a major hub of telecom, construction, power, health and real estate business. Delhi also has India's largest retail industries.

Bangalore is the capital of Karnataka and third most expensive city in India. It is known as an information technology hub. Bangalore is also called the Garden City for its beautiful gardens and parks. Bangalore was ranked as a 'Beta World City' and is often included on a list of top global cities. The city is considered  one of "The Next Decade's Fastest-Growing Cities" with  a 52,346 crore economy.

Chennai is the capital of Tamil Nadu and the fourth populous metropolitan and expensive city in India. It also is a major hub in Information technology, computers, automobile and medical industries. The city is a center of business process outsourcing (BPO) Services. It is home to 24 of the world's best-known companies, each having a net worth of more than $1 billion.

Hyderabad is the capital of Andhra Pradesh and the  sixth populous metropolitan city in India. Hyderabad is known as the City of Pearls. It is a major center of  the IT industry and is home to numerous  biotechnology and pharmaceutical companies.  Hyderabad International airport is often ranked as the world's fifth best airport.

Pune is the eighth largest metropolitan city in India and the second largest city in Maharashtra. Pune is growing rapidly in educational facilities, prime office buildings and  in the glass and sugar industries  The city is home to a robust automotive sector and Symbiosis University of Pune. The city is  also working on improving its housing facilities.

Kolkatta is the capital of West Bengal. It is the center of numerous commercial and financial industries. Kolkatta also has its own stock exchange . It is the third most popular metropolitan city and is infamous for its frequent trade union shut downs. Bata India, ITC Limited and Birla Corp. have worldwide headquarters here. The information technology sector has boosted the city's growth and reputation.

Chandigarh is the capital of both Punjab and Haryana. It was the first planned city in India and is famous internationally for its architecture. The city has the highest per capita income in the country at Rs.99,262 at current prices. It also boasts of being the cleanest city in India. Chandigarh claims to have an estimated GDP of  $2.2 billion.

Jaipur is the largest city and capital of Rajasthan. It is popularly known as the  'Pink City'' and is often ranked as one of the best-planned cities in India. The architecture and structure of Jaipur reflects the royalty of the  Rajputs. It is a metropolitan city and also a major business hub. It is internationally known for its export business of gold, diamond and stone jewelry. The real estate business is expanding quickly in Jaipur. It  is a popular and favorite tourist destination.  In coming years, analysts predict Jaipurwill become a major center of modern business.