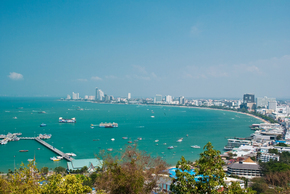 It may not have the glitz and glamour of a Las Vegas or Atlantic City, but Pattaya in Thailand has long been a major tourist destination in Asia. Now it is emerging as a budding real estate development site.

Pattaya sits on the east coast of the Gulf of Thailand, about 165 kilometers southeast of Bangkok. The city is within but not part of Amphoe Bang Lamung (Banglamung) in the province of Chonburi.

A total of 5,000 luxury hotel rooms will open in Pattaya over the next three years, with the new developments expanding out of central areas into the neighboring Sattahip and Na Kluea districts along the coast.

Pattaya also has seen a strong growth in its real estate markets since 2008 and a number of long term, planned environment improvements are helping to make it a more attractive prospect for major real estate development, according to a recent forum orchestrated by the Agency for Real Estate Affairs (AREA) and the Eastern Seaboard chapter of the Real Estate Brokers Association.

Live Trading News in Singapore reports AREA president Sopon Pornchokchai presented new research at the forum  indicating Pattaya has a stronger and more valuable property industry than any another other city in Thailand.

The Singapore publication reported Kingdom Property chief executive officer Nigel Cornick, one of the forum's guests who has been involved in real estate development in Pattaya for the last decade, predicts Pattaya, Jomtien and Pratumnak offer the most development potential today in Thailand.

He told the forum tourism numbers are increasing and  the Eastern Seaboard is attracting new property buyers from abroad,  including India and Japan.

'There are great opportunities here but for me it is important to focus on quality," Comick said. "And that's not about gold taps but construction materials that last and that are of low maintenance."

Live Trading News reports Chonburi Provincial Administration Organization, which oversees tourism development in Pattaya, has set a target of 10 million international and domestic visitors and 100 billion baht (US $3.26 billion) in tourism receipts for Pattaya by 2015.  (One Thai baht equals $.0325 US)

To tap these markets, Live Trading News reports, the Chonburi Provincial Administration Organization has created a 40 billion baht budget to support tourism events like the Pattaya Countdown and Pattaya International Music Festival, and also to participate in international trade shows such as ITB Berlin, SATTE in New Delhi, and Luxury Leisure in Moscow.