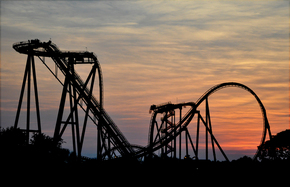 Instead, they are betting on their adjacent commercial and residential developments, including apartments, villas and hotels, to make their profits.

It's a relatively new game that about one-third of China's top 100 property developers are now playing, reports China Daily.

The developers have entered the tourism real estate sector. Big players include industry giants Vanke and Wanda, according to China Venture Group, a research and consulting company.

Here's how they play the game:

Unlike residential developments, the restrictions imposed by the government State Council to cool the "hot" property market do not apply to projects classified as cultural or for entertainment purposes. That loophole allows developers to buy land from the government often at a relatively low price to build a theme park and then erect adjoining apartments and hotels.

To plug that loophole, Beijing city authorities last August banned the construction of new theme parks over a certain size. That move canceled many projects in the capital but didn't deter most developers from continuing with their amusement park development plans.

Many investors don't mind losing money operating theme parks, since the sales of tickets and food make up only a very small percentage of their profits, China Daily reports.

Parks require a lot of funding and have high operating costs, so it can take a long time for investors to recoup their money, amusement park analysts in Beijing point out.

Many theme parks built in the early 2000s have gone bankrupt, with the properties failing to sell at dozens of auctions over the past seven years, according to China Daily.

Theme parks in Asia sold a combined 103.3 million tickets last year, one-third of the total in the world and second only to those sold in North America (127 million), according to AECOM, a Hong Kong tourism consulting firm.

And unlike the US, East Asia is seeing a growing number of new attractions.

Chris Yoshii, an analyst for AECOM, told USA Today recently that almost a third of China's 2,500-plus theme parks have opened within the past two years, with the total number expected to surpass that of the U.S. by 2020.

But even that sort of mass competition doesn't discourage traditional real estate developers.

For example, Victory Kingdom in Tianjin, which borders Beijing, has made 20 million Yuan ($3.14 million) since opening its doors on July 7 of this year.

Yu Gui Garden Investment Group, a real estate developer from Guangdong province, invested three billion Yuan in the project. Yet an insider who did not want to be identified told China Daily the villas and hotels now under construction nearby are expected to turn a bigger profit, and faster.

Many foreign-funded enterprises have settled in the area in recent years. It was made an economic and technological development zone in 1991.

The zone has led to 90 billion Yuan being invested in the past two decades and an influx of 1,200 enterprises from 50 countries and regions, creating about 125,000 jobs.

Traditionally, funding for adventure parks has come from established industry players, such as Overseas Chinese Town Group and Shenzhen Huaqiang Holdings, or multinational entertainment groups, such as Walt Disney Co, which is set to open its first theme park on the Chinese mainland in Shanghai in 2015.

According to 5u588.com, a Chinese tourism-industry information website, 70 tourism real estate projects have already been signed this year, with a total investment of 260 billion Yuan. That figure is expected to surpass 1 trillion Yuan by December.