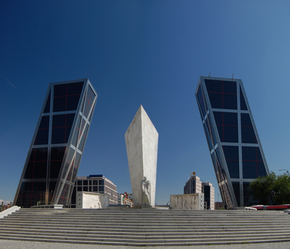 A housing boom that went bust in 2008 has forced Spain to overhaul its entire banking system - a system that showed Bankia, the nation's largest real estate lending consortium, to be saddled with $42 billion ($32 billion Euros) in bad property loans.

In the overhaul, the government nationalized Bankia.

The overhaul forces lenders collectively to come up with $40 billion to cover real-estate losses. The plan also allows lenders to temporarily set aside their toxic assets.

Banks in Greece, Ireland and Portugal already have been bailed out by the European Union.   Until Madrid took action on its own, analysts had speculated Spain would be the newest bailout by the EU.

Analysts speculate the danger in the government's overhaul is that once foreclosed homes and other assets are devalued to current market prices, the losses could bankrupt the lenders and sabotage the entire Spanish economy.

Under the new rules:

He says the 10% government interest rate would balance out the cost to taxpayers. But many economists say the cost of banking reforms could be in the tens of billions of dollars, mostly shouldered by the state.

Another crucial and immediate factor: Many of the troubled banks as a group will be unable to come up with the $40 billion because international investors are avoiding any investment in real estate or banks in Spain at the moment.

Bankia, a consortium of seven Spanish banks that rode the crest of the real estate boom, triggered the overhaul.

Rodrigo Rato, the executive chairman of Bankia, has already resigned.  He is a former finance minister and past managing director of the International Monetary Fund. Rato is the most prominent Spanish banker to quit since the start of the Euro zone's sovereign debt crisis

Spain's plans to rescue its banks is the hottest political issue in that country today.  Prime Minister Mariano Rajoy had previously stated a rescue plan could involve public money. That contradicted his earlier statement not to make taxpayers bear the cost of saving the banks

Bankia was formed in 2010 in a merger of seven savings banks, or cajas. The government encouraged the consolidation of the cajas, which had spearheaded the financing of Spain's real estate boom. When the Spanish construction sector collapsed, Bankia was saddled with the bulk of the industry's non-performing property loans.

Spain injected 4.5 billion euros ($5.9 billion) into Bankia when it was formed to help absorb some of the new company's losses. As part of the merger, Bankia split off its most problematic real assets into BFA, its unlisted parent.