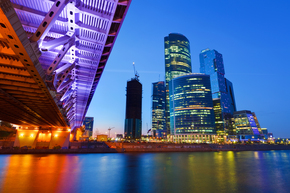 Commercial real estate activity in Russia is down this year for the same reasons it is in most other global markets:  tighter lending policies and uncertain economic growth.

For 2012, total deals in Russia are expected to be valued at about $4.5 billion, down from the $6.4 billion posted in 2011, according to CBRE.  Gross domestic product (GDP) is forecast to grow at about 4 percent. That compares with about 2 percent or lower in the U.S.

CBRE tracked 13 major investment deals aggregately valued at $1.5 billion in the first six months of 2012. Most of the commercial real estate deals were for properties in the Moscow area.

Offices and retail space are the most popular categories of assets for investors. A total of 320,000 square meters (3.4 million square feet) of new industrial space was delivered in the first half of 2012. The average rent in the country was $135 per square meter, but was as high as $150.00 per square meter in some markets.

CBRE predicts there will be strong demand for new prime commercial real estate developments in the near future from both domestic and international investors.

Demand is expected to be particularly high in the Moscow region where investors continue to make steady inquiries on possible deals, CBRE states.