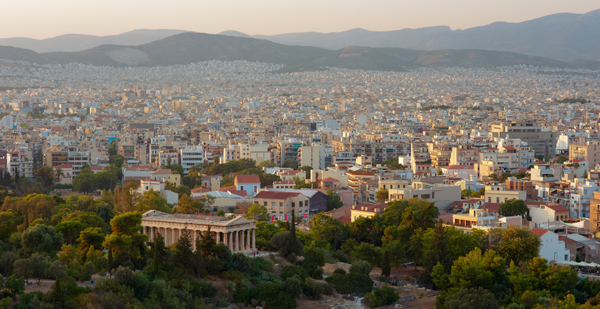 Real estate, and especially commercial real estate, is beginning to play a strong role in the economic recovery of Greece, according to brokers, bankers and consultants in Athens and London.

One big reason is the coalition government led by conservative Prime Minister Antonis Samaras that came to power in June has impressed some investors. Samaras promised to do everything needed to keep bailout funds flowing, easing fears of bankruptcy and leaving the Euro zone.

Even German Chancellor Angela Merkel, who calls the shots on bailout programs for sick Euro zone members, has eased her former position on allowing Greece to default on its debt.  Other Euro zone members may be following Merkel's position.

Dimitris Manoussakis, head of the Athens office of real estate consultant Savills, recently told the media the Greek government's new stance in selling state assets, including real estate as a condition of its bailout over the next several months, may start to convince some investors they will be getting a fair price on property transactions.

Greek investors, especially those living abroad, are becoming interested again in commercial property like hotels and retail, with demand even coming from the US, South Africa and Australia. Six months ago, that same interest was lacking, according to global real estate analysts.

Those potential investors are eyeing bargain prices as their incentive to step back into the market. Those same investors, however, abandoned the country when its economy was faltering and took much of their cash with them.

Reuters reported Kostas Kazolides, a London-based investor who has been investing in and advising on property deals in Greece and Cyprus for 35 years, recently said "There are deals that (once) didn't make sense but do now as the outside world takes the government more seriously."

He added, "People are talking about going back in and buying. There are villas in Mykonos going at 30 percent of their value because sellers are feeling the pinch." A 30 percent fall in construction costs was another incentive.

Data from Lipper, a Thomson Reuters company that tracks the funds industry, shows the amount of money flowing out of Greek equity funds is slower in 2012 than previous years and turned positive in August.

The net outflow from funds investing in Greek equities during 2012 was 17 million euros at the end of August, out of a total asset base of 690 million euros, which indicates a slowdown in investors running for the exit from the 50 million euros of 2011 and 42 million euros lost in 2010, according to Reuters.