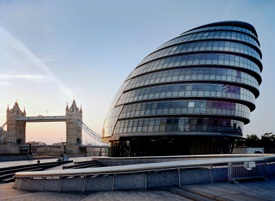 
(LONDON, UK) -- After sitting on the sidelines for two years, investors are stepping back into Britain's battered commercial real estate markets, according to various industry sources.

The reason:   Prices and values have hit bottom. A drop in the British currency over the last year also attracted some foreign investors.

Prime office buildings with long-term tenants and shopping centers are at the top of the investors' shopping list.

The London sector particularly is beginning to recover faster than New York, Tokyo or Frankfurt, according to analysts. Real Capital Analytics of New York City estimates London's market cycle is about six months ahead of New York.

The good news for investors:  New construction is not expected to start up until the beginning of 2011.  That should help lower the vacancy levels in existing properties.

The bad news:  Rents remain low and are expected to stay that way for possibly five years.  Unemployment in the United Kingdom has topped two million, creating less demand for products and rental space.

But that isn't stopping investor groups from purchasing properties now and holding them for the longer term, analysts say.

London & Stamford raised 285 million pounds in 2007, the peak year for British commercial real estate values. But the company didn't make its first office building purchase until this year.  It bought One Fleet Place in London's financial district for 74 million pounds.

That price was an estimated 45 percent discount from its 2007 valuation, The New York Times reports.

Shaftesbury, another property investor, is scouting specifically for discounted assets.

The Oman Investment Fund, an overseas investor, has acquired a majority stake in One Bishops Square in London's financial district.  The price was not disclosed but the current value was estimated at 8 percent below the 2008 level.

Oxford Street Investment Management, a fund backed by the Singapore government,  is also buying an office building in the financial district. The price: 21.4 million pounds. The building's key tenant is on a 12-year lease.

Company chairman Pierre Rolin told CNN his company has participated in $9 billion worth of  international deals for its clients since 1998, achieving an internal rate of return of 18 percent.