In a prepared statement, Henderson officials said the sale proceeds would pay off the securities purchased in 2004 from Epic (Caspar) Plc.  One British pound equals $1.59 US.

The buyers were Mountgrange Investment Management LLP and Patron Capital Ltd. Patron is investing through its $3.8 billion US (three billion euros) Patron Capital LP IV Fund created specifically to buy distressed real estate in Europe. Mountgrange's investment was made by its $478 million (300 million pounds) Real Estate Opportunity Fund set up in 2009 for the same purpose.

Even in Hong Kong's volatile residential market, Swire Properties' sale of its 6,683-square, downtown condominium to an unnamed buyer for $58.7 million established a new pricing record.

The sandstone-and-glass Opus, facing Victoria Peak, was designed by architect Frank Gehry, best know as the creator of the Guggenheim Museum in Bilbao, Spain and the Walt Disney Concert Hall in Los Angeles, CA. 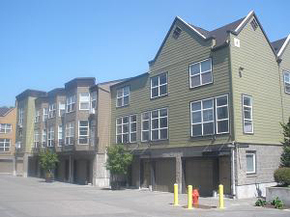 A joint venture between Denver, CO-based Cardinal Group Investments LLC and New York City-based Fundamental Advisors LP has received $54 million in financing to acquire RiverPlace Apartments, a 290-unit, Class A property in Portland, OR. The seller was not identified in the news release from the Portland office of HFF which brokered the transaction.

The financing, obtained from an unnamed national bank, consists of a $44.5 million loan and a $9.5 million mezzanine loan. Terms were not disclosed. The property was completed in phases in 1991 and 1995. The site has 13 residential buildings; 13,444 square feet of street-level retail; and a 302-stall public parking garage.