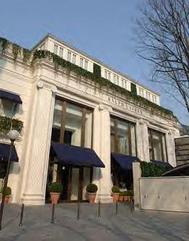 In one of Tokyo's largest real-estate transactions this year, a Japanese-led consortium is set to acquire the distinctive Ralph Lauren building in central Tokyo for $350 million.

The Wall Street Journal reports Secured Capital Japan, a real-estate investment fund, is set buy the property, along with other investors.

Deka Bank, Germany's largest manager of property funds, is the main lender. The sale is expected to close before year end.

The property, which opened in 2006, stands out on the wide boulevard that is primarily filled with modern glass-and-steel buildings. Ralph Lauren leases the space.

Omotesando is one of the poshest addresses in Japan, located on Tokyo's version of the Champs Elysees in Paris. 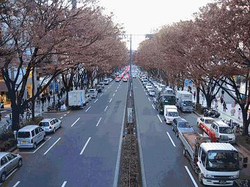 The purchase of the Ralph Lauren Omotesando building is another trophy asset for Secured Capital Japan. The company in December 2009 won a bid for the Pacific Century Place Marunouchi, a top-tier office building located in the central business district adjacent to Tokyo Station, for 140 billion yen.

That was the largest transaction in 2009 by deal size.

Japanese real-estate transactions have been heating up this year, the WSJ reports.

With prices still near 36-year lows, Tokyo led all cities world-wide during the first half of 2010 with real-estate transaction volume exceeding $10 billion, according to Real Capital Analytics, maintaining a big lead over London and Hong Kong, the Nos. 2 and 3 cities, respectively.

Real-estate investment trusts and foreign investors have been active participants in the market, confident that prices have finally bottomed out.

Since banks are facing weak loan demand from corporations, there is ample cash to spend in the real-estate market, Mr. Wakayama said.

He said the Japanese market is still an attractive destination for real-estate investment given the stable economy and relatively high yields.

Though defaults on loans have forced many real-estate transactions this year, observers say delinquency rates have already hit a peak and are starting to decline.

Bankers aggressively pushed real-estate loans in Japan from 2004 to 2007, with properties sometimes leveraged as much as 90%.

When the real-estate bubble bust during the global financial crisis, the accompanying drop in portfolio valuations led to an increase in loan defaults.

Commercial-mortgage-backed securities loans typically have a shorter life span in Japan, where CMBS loans are usually due in about three years, compared with five to seven years in Europe and about a decade in the U.S.

"There is still demand in the Tokyo real-estate market from developers and real-estate funds if a property is located in the center of the Tokyo metropolitan area," said Takashi Hashimoto, an analyst at Barclays Capital.

"For office or retail properties in the area, getting financing from financial institutions is easier."