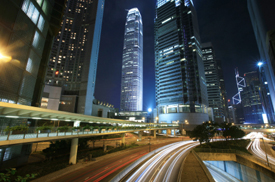 Government records show the unit was sold in late October to Excel Fine Holdings, which local reports say is a Korean investment fund.

Chan said the southern Chinese city's commercial real estate prices will likely continue to rise over the next six months.

"There is definitely potential for prices to rise beyond present levels," he told AFP.

"Right now, the vacancy rates of offices are very low... I expect to see more record prices in the next six months," Chan added.

Another office unit in the city sold in October for 24,950 Hong Kong dollars per square foot, according to the Chinese-language Sing Tao Daily.

Hong Kong has also claimed top spot in the world for the most-expensive office rent at $161 US per square foot, according to a real estate review by Colliers International for the first half of 2010.

The Global Office Real Estate Review put London in second spot at $130 US per square foot and Tokyo in third at 101 dollars.

Asia-Pacific reversed a downward trend by posting 20.8 billion US dollars worth of transactions in the third quarter, 44 percent higher than in the previous quarter, the Singapore-based Association said.

The latest property data come amid fears of a property bubble in Hong Kong, a densely populated city of seven million that is also famous for its sky-high residential rents.

AFP reports a Hong Kong tycoon paid about $233 million, or $8,750 US a square foot, for a property in the city's up-market Peak area last year.

The chief of Hong Kong's de facto central bank warned earlier this month that a recently announced stimulus package to kick-start the US economy could escalate the city's already overheated property market.

Hong Kong's government has unveiled a host of measures aimed at reining in the property market, including holding land auctions to boost supply and tightening mortgage lending.

Luxury home prices in the former British colony recently topped their pre-Asian financial crisis peak in 1997, according to government data released in October.

Average prices for homes of at least 100 square meters (1,100 square feet) were 14 percent above what they fetched before the 1997 downturn, according to the figures.