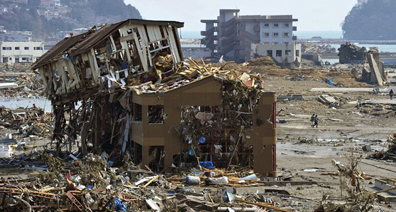 Hit by an earthquake, a tsunami, heavy snow and rain in the past two weeks, Japan now faces a new economic crisis:  the prospect of a crumpled real estate market.

Lower demand for office space, stores and hotel rooms is the biggest fear among Japan's landlords.

Japan is the biggest property investment market in Asia with $24.2 billion of commercial real estate transactions last year, according to Jones Lang LaSalle.

Northern Japan, hardest hit by the earthquake and tsunami, has little foreign and institutional ownership of real-estate, compared with places such as Tokyo and Osaka, investors tells The Wall Street Journal.

The biggest worry is the extent of the damage to reactors at the Fukushima Daiichi nuclear-power plant, about 150 miles north of Tokyo.

Trying to stay positive, Jon-Paul Toppino, president of SCJ Investment Management, told the WSJ, "Absent the nuclear uncertainty, I don't believe there would be any long-term negative impact to the Tokyo real-estate market."

But he may be in a minority on that conclusion.

Japan's publicly traded landlords have lost up to 20% of their value since the earthquake struck March 11.

Even Japanese construction companies such as Kajima Corp., Shimizu Corp., and Taisei Corp., which had hoped they would profit from rebuilding efforts, are no longer certain of that route.

The earthquake hit at a time when Japan's real-estate market was showing signs of recovery, especially in Tokyo and a handful other cities popular with foreign investors, the WSJ reports.

His company has a $5 billion real-estate portfolio in Japan.  Kelley asks, "The big question is, where does the economy go?"

"For hotel companies, the disaster comes at a time of resurgence in global travel. Major operators, including Starwood Hotels & Resorts and Marriott International, haven't reported major structural damage in Japan or interruptions to their business operations, but they could be hurt if tourism and business travel drops," according to the WSJ.

Investors from Hong Kong, Singapore, and other neighbors snapped up property last year, believing that real estate in Japanese cities was still attractive and undervalued. Land prices in Japan have plummeted for more than a decade.

Singapore-based Global Logistic Properties Ltd., one of Asia's largest warehouse owners, estimated less than $50 million in losses to its $6.3 billion portfolio in Japan, according to the WSJ.

Deputy Chairman Jeffrey H. Schwartz, predicted a rise in demand for modern distribution facilities from companies seeking to move out of older warehouses that are more prone to earthquake damage.

"It's a horrible tragedy, but it will drive demand," said Schwartz, a former chief executive of warehouse giant ProLogis.

Global Logistic, which went public in October, owns a portfolio of Asian assets bought from ProLogis by Government of Singapore Investment Corp. in December 2008.

ProLogis said the Japan facilities it still owns largely resumed "some level of operations" on but that its Sendai industrial park sustained water damage on the first floor.