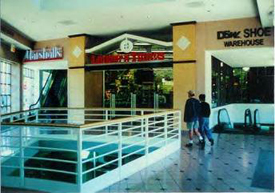 The REIT used its $150 million line of credit and cash on hand to finance the deal.

In a prepared statement, the company says it plans to contribute The Point to its joint venture with PGGM, a Dutch pension fund administrator and asset manager. Inland holds a 55-percent equity interest in the venture and earns fees for asset management, property management, leasing and other services.

Opened in 1996, The Pointe on Clark Street anchors the north end of an expanding shopping district along North Clark Street from Diversey to Belmont Avenues.

Anchors at the center include DSW Shoe Warehouse, Marshalls and Michaels.

A three-story glass atrium with an enclosed glass elevator shaft serves as the building's focal point and principal means of circulation between the three retail levels and the two levels of structured parking.

Parking for 175 cars is provided on levels three and four.

Already holding $7.9 billion of managed assets, Investa Property Group officials say they want to increase that amount shortly. The Sydney-based company, owned by Morgan Stanley since 2007, says it is considering an initial public offering or a takeover of a public company trading at a discount.

Investa is raising capital for its unlisted wholesale fund to buy quality office assets in the Australian market which is set for a significant recovery, Investa CEO Scott MacDonald told Reuters.

"We intend to go public when the timing is right;" MacDonald said "There will come a point in the distant future where some of the investors want to get their money out. And being in the public space, it's easier to do that."

MacDonald added, "The other alternative, that we will look at and we do periodically, is if there is a public company that is trading at a big discount, and we think it could make sense as a future public platform for us, we will take a look at trying to take control of it through M&A (merger and acquisition) activity."

AMP Capital Investors, a unit of Australia's No.2 wealth manager AMP (AMP.AX), is raising money for its open-ended property and Asian equity funds.

"We hope to have indications of interest by mid August," he said, adding preliminary feedback had been strong.

"All these ingredients are pointing to a good recovery," he told Reuters.  He says investors could get an internal rate of return (IRR) of 10 to 13 percent.

DBSI Inc., once a high-flying syndicator of shopping malls, apartment buildings and office towers, faces $800 million in claims from creditors but is only offering to liquidate for less than 20 cents on the dollar.

DBSI was an investment firm that specialized in tenant-in-common arrangements and suffered from the crash in commercial real estate that eventually exposed improper uses of corporate cash.

The company filed for bankruptcy in late 2008, having arranged more than 200 tenant-in-common or TIC investment projects. Under the arrangements, DBSI would buy shopping malls, apartment buildings and offices and then sell interests in the property to investors.

DBSI would then lease the property from the investors and sublease it to retailers or as office space, as well as manage the property.

However, a court-appointed examiner uncovered the company was raising money from investors who thought they were purchasing stakes in real estate development projects. Instead DBSI's management was using the money to plug daily cash needs, according to Reuters.

"The global enterprise did not generate a profit for investors and was kept afloat for many years by an ever-increasing volume of new investor money and heavily-leveraged real estate transactions," the liquidation plan acknowledges.

"This self-feeding cycle continued until the dislocation in the real estate, credit and other financial markets, stymied the debtors' ability to raise sufficient new capital from investors," the plan said.

Undaunted by daily statistics that warn of an impending commercial real estate loan debacle, Prudential Real Estate Investors argues the market is on its way to recovery in top-tier cities, at least.

"Last time it took five years for real estate values to go down to where they bottomed. ... We've done that now in about two years," Marc Halle, a manager of the Prudential Global Real Estate Fund, told reporters in New York. "So we are going to see a faster recovery, a faster write-up in the market."

Halle said his outlook refers only to properties in major cities.

A lack of construction, due to the lack of funding, could keep new supply from hitting the market for up to five years. Rents are also bottoming, reducing the drag on income that is key to commercial real estate values, Halle said.

U.S. commercial real estate will recover more quickly than in the 1990s downturn as a lack of financing limits new supply and investors flush with cash compete for properties, Halle said.

Halle's outlook comes as other fundamentals for commercial property are declining. Many other investors expect delinquencies will worsen as building owners faced with maturing loans in coming years are forced to liquidate, pressuring prices lower.

But many buildings with loans in default are nearly fully occupied, and producing cash flows, Halle said.

Prudential is not looking at smaller or mid-tier cities, he said. Other real estate investors have said these are areas that will continue to suffer most.

There has been a lack of transactions in the market because owners are able to extend terms of loans and wait for the market to stabilize. While some mock the strategy as "extend and pretend," Halle said it is a smart move.

"Loans are being pushed out a couple years because everyone sees fundamentals getting better," he told Reuters.

Still, Prudential has not been a particularly active buyer. It has sold into the market as a "wall of capital" competes for assets, he said.

One caveat to Halle's outlook is jobs, without which companies would have little incentive to expand use of commercial space. The employment trend is slow, but positive, he told Reuters.  Rising interest rates would also hurt, he added.

The commercial real estate market in Delhi is booming as developers and entrepreneurs race to display properties by the time the Commonwealth Games open in October of this year.

With a population of 14 million, this metropolis in India expects to shortly have 27 new hotels with 4,900 rooms, serviced apartments and various other commercial projects, according to MOZ.com, an online news service in India.

About 100 new shopping malls are expected to open by year end. "The prime reason is due to the space crunch such as lack of land availability and limited resources," MOZ.com reports.  "This has caused the Delhi commercial real estate market to soar.

The Delhi property market has attracted large investments in the commercial sector compared to other metros due to its infrastructure, better connectivity and availability of professional work force.

In recent years, the Delhi real estate scenario has changed, due to low demand in acquiring luxury residential properties, according to the news service.  Now, the focus is shifting towards the affordable housing concept "irrespective of Delhi being the one of the top three preferred investment destinations in Asia."

Pacific Alliance Group, an Asia-focused fund investment manager, expects to at least double its investments in Japan over the next year  as financial institutions speed up sales of distressed assets, according to Reuters.

Pacific Alliance Group planned to raise investments in Japan to as much as $500 million over the next 1-½   years from about $200 million now, Anthony Miller, chief executive of Pacific

Miller said Pacific Alliance Group would be looking at hard assets, such as office and residential property, although resorts in Japan would be its least favorite as they were hit the hardest during a downturn.

Miller noted that he was mindful of external risks that could affect Japan's economy and real estate sector.

"If China falls off the cliff, Japan will certainly suffer. The biggest risk to Japan is China and the second is America. The third is Europe," he said.

Pacific Alliance Group had about $5 billion in total assets under management, which included $2.35 billion AUM by Secured Capital, in which it held a 46 percent stake, he said.