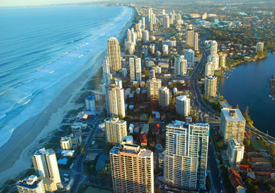 Although not as hot as in previous years, Australia's housing market in 2010 was ranked No. 1 in the world by Toronto-based Scotiabank, an international financial organization that dates back to 1671.

Top housing markets in 2010 (based on home price increases)

Of the 12 advanced nations tracked by Scotia Economics' latest Global Real Estate Trends report, the estimated average inflation-adjusted home prices increased this year in six (Australia, Canada, France, Sweden, Switzerland and the U.K.), were flat in two (Germany and the United States) and fell in four (Ireland, Italy, Japan and Spain). In 2009, eight of the 12 markets suffered price declines.

"The rebound lost some steam in the latter half of the year, mirroring the general loss of momentum in global growth, though regional performances remain highly varied," said Adrienne Warren, Senior Economist, Scotia Economics.

"Despite still attractive borrowing costs, the expiry of purchase incentives in many markets, the relatively slow pace of job creation and mounting concerns over the financial strains facing debt-heavy developed nations are weighing on confidence.

"These factors will likely keep many prospective buyers on the sidelines in 2011."

Australia's housing market is the clear front-runner in 2010. Demand is being supported by low unemployment, while tight housing supply is adding to the upward pressure on prices, according to the report.

Nonetheless, consecutive interest rate increases by the Reserve Bank of Australia (RBA), totaling 175 basis points since October 2009, alongside the expiration of the enhanced First Home Owners Grant in January 2010, have succeeded in cooling its red-hot property market to some degree.

Average inflation-adjusted home prices in the third quarter of 2010 were up 9.4 per cent year over year, compared with a 15.9 per cent increase in Q1.

"We anticipate a further slowing in sales and price appreciation in 2011," added  Warren.

"The RBA has recently taken pause, but we expect the resumption of a gradual policy tightening path in 2011, with short-term rates rising an additional 75 basis points by year-end."

Meanwhile, Canada had one of the better performing housing markets among advanced nations in 2010, though also one of the most volatile.

An unusually active winter and spring, prompted by pent-up demand, expectations of rising interest rates that only partially materialized, the looming transition to a Harmonized Sales Tax (HST) in Ontario and British Columbia, and pending changes in lending qualifying criteria, gave way to an unusually soft summer.

Over the fall, sales have returned to a more typical, sustainable level, according to the report.

"We are neither overtly optimistic nor pessimistic regarding the outlook for 2011," stated Warren.

"On the one hand, we expect interest rates to remain at historically low levels, with the Bank of Canada deferring any further rate hikes to late 2011 given an uncertain global economic outlook and subdued inflation, and longer-term borrowing costs drifting up only modestly.

"This is an extremely powerful inducement for both first-time and move-up buyers and should maintain a decent level of sales."

Public sector hiring has accounted for fully a third of the net new jobs created in Canada over the past year, a pattern not likely to be repeated next year.

Elsewhere in Asia/Pacific, Japan's two-decade long property slump continues, with average prices (land only) down 2.8 per cent y/y in Q3.

Notwithstanding the past year's pick-up in consumer confidence and big-ticket spending, housing demand and prices are being restrained by broad deflationary forces and a declining population.

With Japan's economy expected to slow next year on the back of a weaker export performance and reduced fiscal support, the report suggest little prospect for a sustainable recovery in real estate values.

Conditions in Europe are mixed, with housing activity in the core nations generally holding up better than in the periphery, according to the report.

The U.K. property market staged a strong early-year recovery, though this has given way to moderating conditions through the fall.

Average inflation-adjusted home prices were up 4.4 per cent y/y in Q3, down from a 6.8 per cent y/y increase in the prior quarter, and monthly data point to a further slowing through October.

Germany's decade-long housing slump may have finally come to an end. While official house price data are only available with a considerable lag, private survey estimates suggest some firming in recent quarters, as solid export-driven growth bolstered employment and confidence.

"Along with Japan, Germany's population is not only aging, but shrinking. Meanwhile, its home-ownership rate, at roughly 45 per cent, is among the lowest of high-income nations."

In France, the housing recovery continued to gather momentum through the third quarter, with average prices up 6.8 per cent y/y.

In Switzerland, real prices are tracking in a fairly steady 4-6 per cent range.

Interest rate hikes by Sweden's Riksbank, totaling 100 basis points since mid-year, and new caps on mortgage lending, have only moderated Sweden's housing boom, with average prices still up 5.6 per cent y/y in the July-September period.

In contrast, in many of the hardest-hit European nations, housing prices continue to trend down.

In Spain, average inflation-adjusted prices in Q3 were 5.2 per cent lower than a year earlier, while Ireland is still reporting double-digit declines.

U.S. home prices have stabilized in 2010. Average inflation-adjusted home prices were down a marginal 0.4 per cent y/y in Q3, and are unchanged on a year-to-date basis.

While this semblance of normalcy is encouraging after the near-30 per cent cumulative price correction of the prior four years, the expiration of the home buyers' tax credit at the end of April and a weak job market have kept overall sales at relatively depressed levels through the fall, the report states.