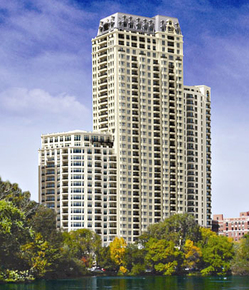 The Lincoln Park 2520 project is one of the largest residential construction projects to receive financing in Chicago since the financial downturn, according to The Wall Street Journal.

The developers, a venture of an affiliate of GE Pension Trust and Ricker-Murphy Development LLC of Chicago, said they have begun above-ground construction. They plan to complete the tower in 2012, nearly two years later than originally expected.

The financing suggests that some lenders may be growing more confident about a real-estate recovery, the WSJ reports.

"It's a sign that we're moving past the collective pessimism of the past 18 months," says Jerry Karr, senior managing director of GE Asset Management, which advises the GE Pension Trust. GE Asset Management is a unit of the General Electric Co.

The Beaux Arts-styled project was designed by Lucien Lagrange Architects and is being built on the site of the now-demolished Columbus Hospital in one of the city's most exclusive neighborhoods.

Units are priced from $1 million to $5.7 million, though some penthouses are priced as high as $11 million. About 30% of the units are presold, the developers said.

Karr described lenders as increasingly open to phone conversations about providing financing to condo developers. "In January you heard a click right after you said the word condo,"  Karr told the WSJ. "By May,  they actually started listening to the story."