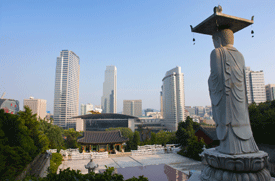 There is trouble today in River City, my friends, and it isn't in Gary, Indiana this time.  It's in Seoul, the capital of Korea.  The Republic's housing bubble is about to burst, warn local economist and insiders.

The house market in the Seoul metropolitan area has become so sluggish that the monthly transactions in apartment housing have been halved from eight months ago, the newspaper reports.

"A storm is brewing in the real estate market as home owners using bank loans may fall into the deadly spiral of debt deflation," the Hyundai Economic Research Institute notes in its weekly report.

If cash-strapped sellers begin to offer their properties at lower prices to repay their loans, this could lead to a further increase in other homeowners' real debt burden and eventually lead to a market collapse, the think tank cautions.

The Institute says the domestic housing market has been "in a kind of stagflation," where prices remain high despite low demand. 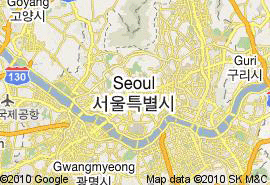 "But there are signs that the market is now going into deflation as prices have begun to fall," the newspaper reports, citing the Institute's data.

The terms deflation and stagflation are not widely used when referring to a specific market such as real estate, but sometimes economists borrow them to attract the attention of the public.

Falling prices, together with the expected increases in bank interest rates, will push up the debt burden on homeowners who have purchased with bank loans, and that will lead to a further selling spree on the market in a chain reaction, the Institute says.

"When the deleveraging of households becomes apparent, it will further dampen the real estate market,'' the Institute believes.  `"It is possible that debt deflation can damage the construction industry as well as households, which will be a big burden on the national economy.''

The Hyundai report is basically claiming that the property bubble is on the verge of a spectacular burst if the government doesn't act quickly to save it, or at least to minimize the damage.

According to the report, there are 165,000 new apartments unsold in Korea as of February, with 27,000 of them in Seoul and its vicinity.

Meanwhile, the sale of old apartment houses, the most favored type of residence in Korea, has dropped to around 6,000 per month this year, from as high as 12,000 per month last summer, according to the Institute.

What the Korean real estate market is facing now is essentially the same crisis Japan had had in the 1990s and early 2000s, when house prices in the six major cities lost two thirds of their value on average over a 15-year span, the report says.

It suggests the central bank to think more prudently when raising the key interest rate, so it does not push homeowners to sell their houses en masse in order to service their debts, The Korea Times reports.

The Institute's report also demanded the government adopt policies to stimulate demand by offering cheap loans and subsidies for buyers.

More outspoken economists say that a bubble burst is inevitable at some point.

Kim Kwang-soo, the chief economist at his own private think-tank, KS Economic Research Institute, had told The Korea Times in March that only 30 percent of homes in Korea are owned by residents without loans, while most of the rest are bought with speculative motives to some degree.

This has formed a huge bubble in the properties market and the government cannot hide it forever, he said.