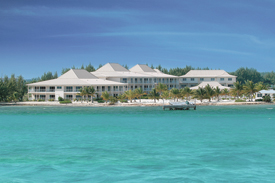 (PARSIPPANY, NJ) -- Soft economy or not, Wyndham Hotel Group is betting new business is around the corner on Grand Cayman Island.

Both resorts are owned and managed by the Grand Cayman-based GFK Group, a property development and management firm with more than 25 years of experience developing in the Cayman Islands.

"We knew that Wyndham Hotel Group was the company we wanted to do business with right from the start," says GFK Group managing director Theresa Foster.   "We want to be backed by a company with strong brands and with significant breadth and scale, and we found a match in Wyndham."

"By adding not one, but two properties in the Caymans, Wyndham Hotel Group is well poised to take advantage of the tourism opportunities that exist there."

Smith says construction on the Wyndham Grand Bay Waterford - Cayman Islands is expected to be completed in the third quarter of 2011. The five star luxury property will feature rooms with a British Colonial décor that offer sweeping ocean views from North Sound to Rum Point.

Smith says that in addition to the completed renovations, the resort will also be adding an additional 44-unit condo hotel and free form swimming pool with beach access later this year.

All hotels are owned individually and operated independently or by Wyndham Hotel Management.