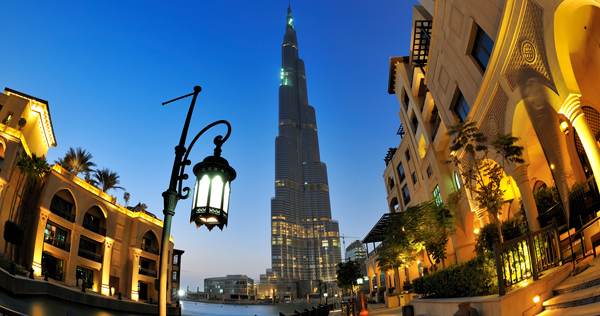 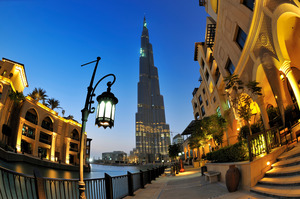 Being auctioned is an entire corporate floor above the 110th story. The building cost $1.5 billion when it opened Jan. 4, 2010.

Freedom Realty Exchange of Newport Beach, CA is managing the auction.  Freedom Realty  is owned and managed by LFC Internet Marketing, Inc., a member of the LFC Group of Companies.

The mixed-use tower has been mostly vacant, even though well-known corporate names have inquired about tenancy.  Others already have reserved or leased space. The tower is anchored by the Giorgio Armani-designed Armani Hotel Dubai and also features Armani-themed condominiums and ultra-luxury residences.

"As far as notable real estate auctions, this one tops them all,"  Bill Lange, president and CEO, LFC Group of Companies, states in a press release.

"Regardless of the notoriety of the Burj Khalifa, the auction will attract serious buyers who understand that this is an once-in-a-lifetime opportunity to purchase an entire corporate floor in the Burj Khalifa at a price they determine through online bidding."

A representative for the building's owner, Emaar Properties, adds,  "Dubai is a global community and what better way to reach the global buying market than with an online auction where anyone interested in purchasing the property can do so no matter where they are in the world."

Auctions have proved to be effective where supply is high and demand is low; "a   case in point with many of the corporate suites" in the Burj Khalifa, according to the auction manager.

The release notes the real estate market in Dubai is improving, mostly on the residential side. However, the commercial and office markets remain sluggish with sellers looking to sell quickly so long as their losses are not extreme.

The Burj Khalifa, initially  known as Burj Dubai, stands over 828 meters or 2,716 feet tall with panoramic views of the Dubai skyline. It has 76 elevators and eight escalators. The exterior has 26,000 glass panels covering a total area of 142,000m2.

The corporate suites and the offices occupy 37 floors with an express elevator transporting visitors directly to the corporate lobby on Level 123.

The Burj Khalifa has held the distinction of being the tallest building in the world since 2010. Before then, the 101-story, 1,671-foot Taipei 101 was considered the tallest since 2004. It was initially called Taipei World Financial Center. The tower is located in the Xinyi District of Taipei in the Republic of China.

The building has two parking levels in the basement. The tower's total floor area is 3.33 million square feet. Average individual floor sizes were not disclosed in the release.