It's not a pretty picture. Numerous borrowers who took out commercial real estate loans in 2007 find themselves defaulting on the payback today, according to the latest research from New York City-based Trepp LLC.  Here is what Trepp found: 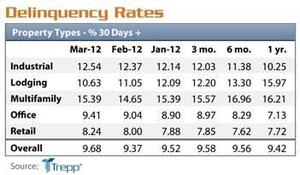 "We predicted late last year that the delinquency rate would rise largely on the impact of 2007 loans coming due, and today's report underscores that forecast," says Manus Clancy, senior managing director at Trepp

"After the rate fell nicely in January and February, we were cautiously hopeful that we'd be wrong.  This month's report shows that the market has a lot of wood to cut and that a rate north of 10% can't be ruled out."

For the second straight month, loss resolutions were relatively modest, Clancy says. At about $1 billion, the number was lower than what the CMBS market has been seeing in recent months.


The failures occurred in three states - Georgia, Illinois and Michigan.

There have been four failures in Georgia so far in 2012, and 79 since the current cycle of failures began in 2007, placing the state in first place for failures.

Illinois saw three bank failures so far in 2012 and 49 since the current cycle began.

Michigan witnessed the first failure in the state in 2012 and the 13th since late-2007.

"Despite the slowing pace, we continue to see a significant number of banks at high risk of failure, and expect failures to continue for an extended period of time," Trepp notes.