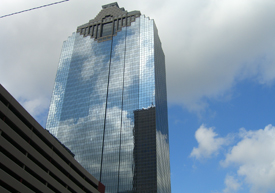 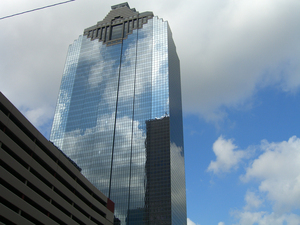 Toronto-based Brookfield Properties Corp. (NYSE and TSX:BPO) is on a roll.

Closing credits of $3.5 million brought the net price down to  $321.5 million.  The transaction marked one of the biggest U.S. office deals completed in 2010 to date. The building is 84 percent leased.

"This acquisition is in keeping with our strategy of owning and operating the best-quality assets in our core markets," said Dennis Friedrich, president and chief executive officer of Brookfield Office Properties' U.S. Commercial Operations.

"We are pleased to add one of the top institutional-quality buildings in the market to our strong and well-established Houston portfolio and operating platform at attractive investment terms."

The acquisition was financed using the company's available liquidity and a $200 million fixed-rate, 4.97% loan maturing in January 2023.

Heritage Plaza, at 1111 Bagby Street, overlooks historic Sam Houston Park and is well-known for its distinctive design elements, a recognizable marker on the Houston skyline.

The building is convenient to major thoroughfares and provides direct passage to adjacent buildings and surrounding amenities via sky bridge. Tenant amenities include ample on-site parking and a fitness center.

Anchor tenants of the include Deloitte and EOG Resources.

Standing at 762 feet (232 meters), the tower is the fifth tallest building in Houston, the eighth tallest in Texas, and the 60th tallest in the United States, according to Wikipedia. The building, designed by Houston-based M. Nasr & Partners P.C., was completed in 1987.

It was the last major office building completed in downtown Houston prior to the collapse of the Texas real estate, banking, and oil industries in the 1980s.

The building stood as the most recently completed major skyscraper in Houston for over 10 years, until the completion of 1500 Louisiana Street in 2002.

Its portfolio is comprised of interests in 111 properties totaling more than 76 million square feet in the downtown cores of New York, Washington, D.C., Houston, Los Angeles, Toronto, Calgary, Ottawa, Sydney, Melbourne and Perth, making it the global leader in the ownership and management of office assets.

Landmark properties include the World Financial Center in Manhattan, Brookfield Place in Toronto, Bank of America Plaza in Los Angeles, Bankers Hall in Calgary, Darling Park in Sydney and City Square in Perth.

The company's common shares trade on the NYSE and TSX under the symbol BPO.