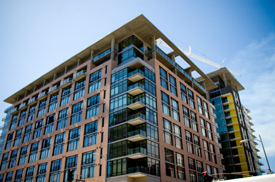 A ton of new mortgage loans is maturing this year---$171 billion of non-bank commercial and multifamily loans, to be exact.

If the financial markets aren't stabilized immediately, many of those loans could go bad because they would not be extended. They would  rupture the industry even more than it has been to date.

"Substantial concerns have been raised about the volume of mortgages maturing in the face of the current credit crunch," says Jamie Woodwell, MBA's Vice President of Commercial Real Estate Research.

A new MBA study shows the volume of loans maturing varies considerably by the type of investor holding the loan.

Short-term floating-rate mortgages in commercial mortgage-backed securities (CMBS) and mortgages held by credit companies, warehouse facilities and other investors are more likely to mature in 2009 and 2010 than are fixed-rate CMBS mortgages, mortgages held by life insurance companies or multifamily mortgages held or guaranteed by Fannie Mae, Freddie Mac or FHA.

The  study shows that while the dollar volume of maturing non-bank mortgages represents only one-tenth of the total outstanding balance, it is not evenly spread across investor and lender groups.

Woodwell says, "While some parts of that system, such as floating-rate CMBS and credit companies, warehouse facilities and other investors,  face a significant volume of near-term loan maturities, others, including fixed-rate conduit CMBS, life insurance companies, Fannie Mae, Freddie Mac and FHA, do not."

"Across all these investor groups, commercial/multifamily lenders and servicers have a wide variety of tools to help them deal with maturing mortgages, which should mitigate, but not eliminate the impact of maturities in 2009," adds Woodwell.

"To the degree mortgages are extended into out years, however, there is an increased consequence should the markets not be functioning in 2010, 2011 or beyond."

Woodwell says investor groups' maturity schedules are "generally designed to their match liabilities, and most investor groups have considerable discretion in how they deal with loans that may not be able to immediately refinance at maturity."

Of the total non-bank holdings of commercial/multifamily mortgages coming due in 2009, 52.8 percent is in CMBS, CDOs or other ABS, and an additional 33.6 percent is held by credit companies, warehouse facilities or other investors.

Only 9.8 percent of the non-bank mortgages maturing in 2009 are held by life insurance companies, and 3.8 percent are held or guaranteed by Fannie Mae, Freddie Mac or FHA.

"Even within an individual investor group there are significant variations," Woodwell says.

"It is important to note that a significant share of CMBS loans maturing in the next two years are floating-rate loans, which tend to have larger balances and to be shorter-term in nature."

According to data from RBS Greenwich Capital, $31 billion of the current balance of CMBS loans maturing in 2009 is in floating rate loans.

These floating-rate loans tend to have extension options built into them, and according to RBS, only $1.9 billion of the floating rate loans maturing in 2009 have exhausted these options.

An additional $19 billion of the balance is fixed-rate loans in conduit/fusion CMBS deals.

The CMBS, CDO and other ABS loans categorized in the MBA report also includes B-notes, privately-issued CMBS, mezzanine and other loans that are related to the CMBS market but may not be a part of a publicly issued commercial mortgage-backed security.