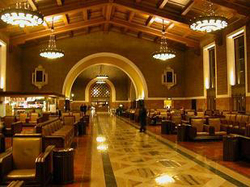 It's the biggest commercial deal in the New Year.  Denver, CO-based ProLogis (NYSE: PLD) is selling a portfolio of U.S. retail and mixed-use assets and the Catellus name for a total purchase price of about $505 million.

Most of the deal with affiliates of San Francisco, CA-based TPG Capital is scheduled to close in the first quarter, the company announced.

Net proceeds will be used for the repayment of debt and to fund future development activity.

"We have built upon Catellus' legacy for the past five years and are pleased to see these assets and people transfer to TPG, which has significant experience in real estate and a commitment to building the business.

"The Catellus assets are high-quality with good long-term prospects, but they are not in keeping with our strategy to concentrate our investment in core industrial properties in the world's major logistics corridors."

"We are excited to partner with the strong Catellus management team in the next chapter of the company's evolution," said Kelvin Davis, TPG senior partner.

"The company is already well positioned through its diverse portfolio of high-quality, well-occupied assets in growing markets.

"As a standalone company, we believe the new Catellus will be in an excellent position to capitalize on the economic recovery and build on its strong footprint."

The majority of ProLogis employees associated with the retail/mixed-use properties will be offered employment with Catellus.

Following the closing of the sale to TPG, it is expected that ProLogis' president and chief investment officer Ted R. Antenucci, who joined ProLogis with the Catellus merger in 2005, will rejoin Catellus after a transition period concluding in mid-2011., according to the ProLogis news release.

Partial or full redemption can occur at any time at TPG's discretion or after the five-year anniversary at ProLogis' discretion.