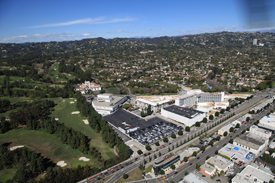 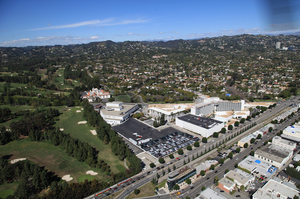 Three years ago, one of the most visible mixed-use sites in Beverly Hills, CA at Wilshire and Santa Monica Boulevards sold for $500 million.

The price marked the steepest discount of any real estate property in affluent Beverly Hills this year, according to local brokers and researchers.

The investors plan to create "a landmark development" on the site, according to their press release.

The 9900 Wilshire plan by Architect Richard Meier, who designed the world famous Getty Center in Los Angeles, was approved by the City of Beverly Hills in 2008 for 235 condominiums and 17,000 square feet of retail and restaurant space set among extensive gardens.

Joint Treasure was acting for three of its consortium partners:


Purchased for a record breaking $500 million in 2007 by jet-setting British developers Nicholas and Christian Candy and their CPC Group, the property fell into foreclosure early this year and was acquired by Carlos Slim's Banco Inbursa, one of the lenders.

"This is an incomparable site that cannot be replicated and we intend to build a superb project offering world class luxury residences," said Daniel Yiu, Senior Advisor to Joint Treasure.

He noted that the investor group is familiar with the city because of its investment in The Regent Beverly Hills Hotel in 1995 still under ownership.

"Our investor group is interested only in premier properties in premier locations," Yiu says in the prepared statement.

Other U.S. properties that the Joint Treasure International consortium has acquired for its investors include the New York Four Seasons Hotel and two New York City apartment and condominium buildings, The Horizon and Park Avenue Court.

The group also financed and launched development of a 76-acre, 12-city block mixed-use project on South Riverside Drive in New York City which it subsequently sold along with almost all of its real estate investments worldwide in 2007 prior to the economic downturn.

The group is now on its next cycle of investment and the mandate is to acquire major properties in first tier cities including Los Angeles, San Francisco, New York, London, Tokyo and Sydney.

The 9900 Wilshire site housed Robinson's Beverly Hills that opened in February 1952 and set a new standard for department stores with its open and spacious floor plans, modern architecture and California landscaping.

Robinson's was acquired by May Company stores in 1993 and the Beverly Hills store was closed in 2006.  The site was acquired by New Pacific Realty for $33.5 million in 2004 and then sold to Candy & Candy three years later.