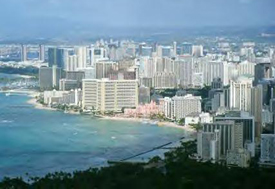 Times are a-changing on the glamorous Hawaiian island of Waikiki.

Waikiki leisure and vacation attractions remain vibrant but when it comes to shopping for everyday items, buyers have abandoned ritzy Kalakaua Avenue and head for the discount retailers on lower-rent Keeaumoku Street on the outskirts of the Hawaiian city.

"Waikiki has been around for years,"  Honolulu real estate analyst and consultant Stephany Sofos tells the Honolulu Star-Advertiser.

"it's convenient, people like it, but you're seeing less people shopping there because of better opportunities for pricing outside" of downtown Waikiki.

Shoppers today are "savvy and very discerning; they know what they want and are willing to go out and get it. It's a new generation that's willing to go off and be adventurous," Sofos says.

"Part of it is they're looking for different experiences outside of Waikiki."

Another factor in the retail falloff in Waikiki central is the tourist count. Visitor arrivals fell to 6.5 million last year from 6.8 million in 2008, while visitor expenditures dropped to $10.1 billion last year from $11.4 billion the year before, according to state data.

That doesn't include empty spaces with less than 1,000 square feet or the new Hard Rock Cafe building on Beachwalk Street, which is set to open later this year and has yet to fill all its retail space, the Star-Advertiser reports.

A significant falloff in foot traffic beyond Waikiki's hotels and main attractions has left the outlying Ewa end of one of the world's top destinations with vast unoccupied spaces, according to the newspaper.

The most visibly desolate is the former Niketown complex--the four-story building officially called King Kalakaua Plaza--with 77,000 square feet of space which has been unoccupied for nearly a year. The building, which opened in 1998, used to house a Nike store, Banana Republic and the Official All Star Cafe.

"Basically what you have is a difficulty in these tenants surviving, being located on the outskirts of Waikiki,"  Mike Hamasu, Colliers' director of consulting and research, says in his company's report.

During the boom years developers tried to capitalize on the pent-up demand for space in Waikiki and expand the retail core with the expectation that the national retail chains, such as Nike and Banana Republic, would be enough to entice tourists to walk several blocks away from their hotels.

"They tried and for awhile it worked," says analyst Sofos. "Then a confluence of trends emptied out the area, including a drop in tourists, lower spending among tourists increased competition from retailers outside of Waikiki and a change in shopping habits. Tourists today are often seen shopping at discount retailers outside Waikiki, such as Walmart and Ross Dress for Less on Keeaumoku Street.

"The vacancies correspond to the drop in pedestrian traffic as you move farther from Waikiki's core, defined by Colliers as Kalakaua Avenue between Lewers and Kaiulani streets," the Star-Advertiser states.

Colliers, which tracks foot traffic, says an average 24,000 shoppers per day are seen on Kalakaua Avenue near the International Market Place and Royal Hawaiian Center. That number drops off to 5,500 near the fringes of Waikiki.

Monthly rents along Kalakaua range from as high as $25 per square foot near the center to $8 on the outskirts, according to Colliers.

"While $8 on Kalakaua might seem attractive, it is more than double what a business owner can get in a residential shopping area on Oahu," according to Colliers.

The relatively high rent and lower foot traffic in the remote areas of Waikiki restrict what type of businesses can succeed, says Kim Scoggins, Colliers vice president for leasing and sales, and co-division manager.

"It's very limited in the uses you can put down there," says Scoggins. "That's why you don't see a lot of fast food. Fast-food operators can't do enough business there."

In addition, some of the empty spaces, such as Niketown, are a size that only a major retailer could handle.

"These spaces are huge so you've got to find the right kind of tenant that can pay the rent for that kind of space," says Colliers' Hamasu.  "You've got to get yourself a retailer that can draw people from Waikiki to that location. It's not going to be a small mom-and-pop that doesn't have a big appeal."

Additionally, the Japanese market, which the Niketown complex and others were built to attract, has never fully recovered from what it used to be before the collapse of Japan's bubble economy in the early 1990s, according to Honolulu analyst Sofos.

Still, there are retailers seeking to enter the historically tight retail market, particularly since rents have fallen nearly 17 percent in the past year, according to Colliers.

"We see the economy slowly but steadily improving, and we are taking advantage of any opportunities we can find to extend market share at a time when many others are losing it," Mitch McEwen, brand manager for Hawaiian Island Creations, tells the Star-Advertiser.

McEwan's firm opened in May at Waikiki Beachwalk in the space formerly occupied by Burberry.

"We have a strong local customer base but have not been as prominent within the visitor market, so when the opportunity came up for us to have a high-profile Waikiki location, we jumped on it."

Teddy Bear World, a Korean company, is scheduled to open its first U.S. museum and gift shop in November at the former Planet Hollywood site on Kalakaua and Beachwalk.

Teddy Bear World is banking on its unique concept to draw people to the location just outside Waikiki's core retail area, Billy Chang, director of marketing, told the Star-Advertiser.

The company sees the slower economy as an opportunity to expand, Chang said. "We want to appeal to the masses," he said. "We're unique in the sense that we're theme-based and continually adjusting to the changing markets."

Besides HIC and Teddy Bear World Hawaii, other retailers slated to open in the near future in prime spaces on Kalakaua Avenue include Sephora, Forever 21 and Eggs 'N Things.

"The bottom line is consumers are very fickle; they go through trends," adds Sofos, the Honolulu analyst.

"When your economy contracts, the first place to go is the secondary and ancillary areas. It's just a cycle -- it's hard to bring it back because competition has gotten so stiff and rents are so much cheaper outside of Waikiki."