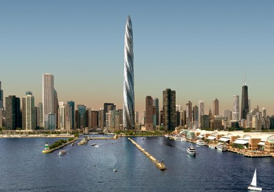 Three of the tallest towers in the U.S. are in a race to claim bragging rights to the tallest building in the country. Two are office buildings; one is residential.


Chicago Spire, however, may have to default the title because it is only half-built and has run into construction financing problems since 2008. Spanish architect Santiago Calatrava designed the structure which is slated to overlook Lake Michigan

The 110-story Willis Tower, formerly the Sears Tower, has been up and operating since 1973 when Sears & Roebuck moved its world retail headquarters to the building.

It was renamed in July 2009 after the building's main new office tenant, the Willis Group insurance firm of London.

For now, Willis Tower claims title to the tallest building in the U.S.

But that distinction shortly may be transferred to the 1,776-foot One World Trade Center in New York now under construction.

Marshall Gerometta, database editor for the Council on Tall Buildings and Urban Habitat in Chicago, is keeping track of the race.

Most recently, Anglo Irish Bank Corp. moved to foreclose on a defaulted mortgage valued at about $77 million including interest and other unpaid charges held by the developer, Shelbourne Development, according to a recent filing in Circuit Court of Cook County, Ill.

Lorig Construction Co. of Des Plaines, Ill. earlier filed suit seeking about $512,386 for what it alleged was unpaid work on the project.

The country's tallest building title "would go back to New York," if the Spire doesn't go forward and the New York building is completed as planned, Gerometta told The Wall Street Journal.

An attorney for the Spire's developer told the WSJ the project isn't dead and Shelbourne still is seeking other sources of financing.