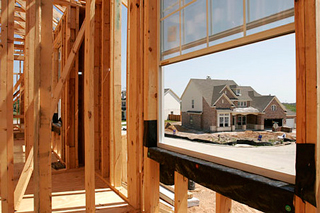 Residential News » Residential Real Estate Edition | By Alex Finkelstein | November 20, 2008 3:34 PM ET
Signup for Our Weekly Newsletter »
(WASHINGTON, DC) - Home builders nationally have put away their hammers and saws.  They not only are shelving the construction of new homes these days.  They also don't plan to do so for some time, according to new numbers released today by the U.S. Commerce Department.

Overall housing starts declined 4.5 percent to a seasonally adjusted annual rate of 791,000 units in October, the slowest pace recorded for any month since the government started keeping track in 1959.

Issuance of building permits, an indicator of future building activity, was down across the board in October.

Total permits registered a sharp 12 percent decline to 708,000 units - again, the lowest rate for any month on record since the series began.

The Commerce Department notes two out of four regions posted double-digit declines in housing starts for October, including the Northeast's 31 percent reduction (which may have been accentuated by a recent building code change in New York City) and the Midwest's 13.7 percent decline.

Meanwhile, starts in the South eked out a gain of 1.5 percent and starts in the West bounced partway back from a major decline in the previous month with a 7.5 percent gain in October.


"Today's record low numbers are in sync with results of our latest home builder surveys, and are clear evidence of the need for both fiscal and monetary stimulus efforts by the federal government," says National Association of Home Builders  Chief Economist David A. Crowe.


"In particular, Congress should consider significant consumer incentives such as expanding the first-time home buyer tax credit and providing a government buy-down of mortgage interest rates for home purchasers - policies modeled after a successful use of the same dual stimulus to housing demand in the 1974-1975 recession.

"Without a consumer kick-start, the downward momentum will continue longer and deeper."

"Builders are doing everything in their power to address the overhang of unsold homes on the market through aggressive inventory management, including reining in production of new homes and offering substantial home buyer incentives," says Dunn, a home builder from Point Pleasant, W.Va.

"But this simply isn't enough. More needs to be done, and Congress and the Administration need to step in with measures that will help get consumers back into the marketplace and revive economic growth."