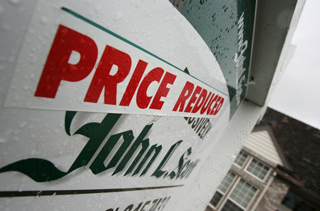 Standard & Poor's says its S&P/Case-Shiller Home Price Indices through September of this year shows continued broad-based declines in the prices of existing single family homes across the United States, a trend that prevailed since 2007.

"The turmoil in the financial markets is placing further downward pressure on a housing market already weakened by its own fundamentals," says David M. Blitzer, Chairman of the Index Committee at Standard & Poor's. "All three aggregate indices and 13 of the 20 metro areas are reporting new record  rates of decline."

Blitzer says this has increased from the annual declines of 15.1% and 14.0%, reported for the second  and first quarters of the year, respectively.

Dallas and Charlotte faired the best in September in terms of relative year-over-year returns. While also in negative territory, their declines remained in single digits of -2.7% and -3.5%, respectively.

However, Blitzer points out, both are at rates of decline lower than those reported in August's numbers. In addition, Charlotte also reported its largest monthly decline on record, down 1.3%. Monthly returns were negative across the board.

Cleveland was the one market that showed any improvement in its year-over-year returns reporting -6.4% compared to the -6.6% reported for August.

In a regional report, the Florida Association of Realtors says Florida's existing home sales rose in October for the second month in a row, showing a 15 percent increase in activity in the year-to-year comparison.

But prices continued their downward spiral in all markets.

Florida's median sales price for existing homes last month was $169,700; a year ago, it was $222,200 for a 24 percent decrease. The median is the midpoint; half the homes sold for more, half for less.

The national median sales price for existing single-family homes in September 2008 was $190,600, down 8.6 percent from a year earlier, according to the National Association of Realtors.

Market conditions continue to range widely, according to the latest housing outlook from NAR.

"Affordability conditions have consistently been a major factor in driving sales. Historically during recessions, buyers have responded to incentives and it's important for government to keep that in the forefront of housing stimulus decisions."