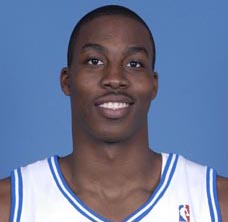 The 23-year-old Howard, whose uniform number is 12, was the Magic's first-round pick in the 2004 National Basketball Association draft.