Philip A. Powers, managing director of Carlton Exchange, confirms Siegel, whom he is not naming, has received development rights bids in the $22 million to $25 million range. The rights were listed for sale at $37 million.

Powers told the Los Angeles Times the rights allow a developer to construct up to 400 condominium homes above a parking garage at the 440,000-square-foot, outdoor Anaheim GardenWalk mall at 321 Disney Way in Anaheim, CA.  The mall is one block from Disneyland.

However, William J. Stone, senior vice president of development at San Diego, CA-based Excel Realty Holdings, the mall's developer and manager, tells Real Estate Channel that "entitlements do not allow the construction of condominium homes on the property Westgate owns."

Powers told the Los Angeles Times Siegel, whom he didn't identify by name, already has spent $19 million on his project, most of the money going for structural upgrades on the parking garage.

"All a buyer has to do is pull permits to get started," Powers told the newspaper.

Siegel himself told Timeshare Forums, an online publication, on Feb. 10, 2008, that a groundbreaking had already started at his planned 400-unit California project, Westgate Anaheim GardenWalk.

Asked by Timeshare Forums how to explain his success in developing successful family resort destinations around the country, Siegel, a developer for 40 years, said,

"Part of it is magic...The rest is inspiration."

But inspiration wasn't enough to cope with an unexpected crippling economy. The Westgate Anaheim GardenWalk project was not completed and Siegel placed the rooftop development rights up for sale this year.

While Siegel's development rights currently are attracting bidders from hotel and timeshare companies, along with other global investors, Anaheim GardenWalk itself is scheduled to go on the auction table April 8. 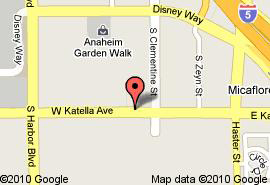 Valued at $325 million when it was constructed in 2008, Anaheim GardenWalk is only 65 percent occupied, according to the Los Angeles Times.

Stone told the Los Angeles Times Excel Realty is negotiating with Citigroup to remain as manager of the property. Among its tenants are Ann Taylor Loft, Hollister, Harley-Davidson of Anaheim, Roy's Hawaiian Fusion Cuisine and P.F. Chang's China Bistro.