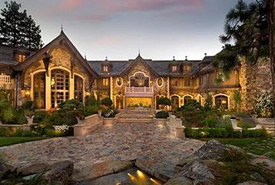 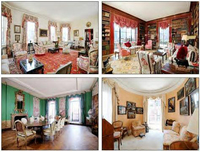 Even the rich and famous understand it's a down market today on most residential real estate, slashing prices on some of their mansions by 50 percent or more.

But there is still a cadre of wealthy homeowners who don't need the money and are holding fast to their original asking price.

The Wall Street Journal reports the asking price on the late Brooke Astor's Park Avenue duplex in Manhattan has plummeted to $24.9 million from $46 million.

Peter Sperling, son of the University of Phoenix founder John Sperling, dropped the price on his San Francisco limestone mansion to $47 million. He had been asking $65 million since 2006.

The listing has been on the market since at least April 2007, a month when the Dow passed 13,000, the WSJ reports. David Saperstein has an equestrian estate that's been asking $75 million since at least August 2007.

Also sitting on the market is the 6,500-acre Carmel Valley, Calif., ranch owned by Jim Kirk, who founded rental equipment company NationsRent, which sold for $600 million in 2006.

Purchased for about $10 million after a five-year search, the property--with a four-bedroom main house, hiking trails and other structures--has been listed at $33 million since November 2006, according to the WSJ.

"We've never been in a more price-sensitive market," says Janet Owen of Sudler Sotheby's International Realty, who recently got the listing for the Chicago mansion of J.P. Morgan CEO Jamie Dimon.

Originally listed for $13.5 million in 2007, the home as of August was listed at $6.95 million. It went into contract in late September.

Some holdouts and their brokers defend their prices, arguing that their estates would be difficult, if not impossible, to replicate today.

"I feel the property is worth every penny -- and probably then some," says Tommy Hilfiger co-founder Joel Horowitz, who has been asking $100 million for his 210-acre estate in Zephyr Cove, Nev., since July 2006.

At that time, National Association of Realtors' then-Chief Economist David Lereah warned that housing appeared to be headed for a soft landing in most markets.

London developers Nick and Christian Candy in September reportedly sold their Monaco penthouse for nearly £200 million (about $314.3 million), believed to be one of the most expensive residential real-estate deals in the world.

Since buyers can be expected to come in with lowball offers, cutting the asking price would be akin to negotiating with yourself,  former New York Giants running back Tucker Frederickson, told the WSJ.

Frederickson, with a partner, has been asking $50 million for a 5,000-acre cattle-and-shooting ranch in Florida since 2008.

While many home sellers can be slow to adjust to the market, the very wealthy can be the slowest of all.

"That stratum of the population is not impervious to what's happening in the market, but they operate by their own set of dynamics," says Sam Khater, senior economist at real-estate research firm CoreLogic.

Still, it's a rule of thumb that the longer a listing lingers, the less desirable it often seems to buyers.