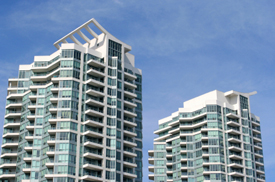 The Cosmopolitan of Las Vegas Gives Up on Condos

The two 50-story, $3.9 billion Cosmopolitan towers of Las Vegas has given up on selling its 3,000 rooms as condominiums and will instead open in December as a hotel with about 2,000-condo-like rooms, according to Reuters. The remaining 1,000 rooms will open in 2011.

The change comes as Deutsche Bank AG (DBKGn.DE) acquired the property in a foreclosure in 2008.

About two-thirds of the resort's 3,000 rooms -- many with private terraces -- will open in December. The remainder will come on line in 2011, according to Deutsche Bank spokesman John Gallagher.

The Cosmopolitan towers are wedged between two MGM Mirage (MGM.N)-run resorts -- the multi-tower CityCenter and the Bellagio -- on the west side of the Strip.

The Cosmopolitan has settled a class action lawsuit brought by about 1,500 buyers seeking to cancel contracts for condominium units that were signed at prices set during the real estate market bubble, Reuters reports.

Under the settlement, buyers will be refunded about 62 percent of their deposits.

"We believe the property will be 100 percent hotel, rather than a mix of hotel and condo-hotel as originally planned," Union Gaming principal Bill Lerner said in a research note.

Rooms, with condominium-type features such as kitchenettes, will range from 730 square feet to over 5,400 square feet. Ten three-story bungalow-style suites will overlook a pool deck.

Los Angeles County apartment landlords aren't too happy these days. Rents are dropping as many tenants move back home or double up with friends.

Those tenant relocations forced apartment owners to reduce rents not only to attract new tenants but to also hang onto the renters they have, according to the Los Angeles Daily News.

In West Los Angeles particularly, the vacancy rate has topped 12%, according to James B. Clarke, executive director, Apartment Association of Greater Los Angeles.

Clarke senses things are starting to turn around but recovery for this sector won't be quick, he tells the Daily News.

"We're probably not going to feel it for another year," he said of a market rebound.

Vacancy rates are also expected to drop but that won't slow rent decreases, according to  the Casden Multifamily Market Forecast compiled for the University of Southern California.

"Overall, Southern California will not see sustained increases in rents until the greater economic health of the region improves," says Tracey Seslen, co-author of the forecast.

Housing prices have been rising and unemployment in the county is currently at 12.3 percent and many luxury condos that didn't sell during the recession have been turned into rental units, the Daily News reports.

The seven-tower, no-frills Trump Village overlooking Coney Island at the southern tip of Brooklyn, NY and in its 46th year of operation, is only now being "discovered" by wealthy buyers.

Walls in vacant units are being knocked down and duplexes are being created.  That's not what the late Fred Trump, father of TV and real estate entrepreneur Donald J. Trump initially envisioned, according to The New York Times. Trump Village was conceived, built and opened in 1964 for low-income families - families that couldn't afford or desired the multi-million-dollar condos and coops the Trump Organization later built in Manhattan.

Fred Trump and Abraham E. Kazan, the union leader who pioneered the building of cooperative apartments for working families, purchased 61 acres in the 1950s on Coney Island. The partners later divided the land and went separate ways, The Times reports.

The seven towers of Trump Village were designed by architect Morris Lapidus. The two near Ocean Parkway were rental buildings and were run by the Trump Organization until recent years.

The five other buildings were in the state's Mitchell-Lama program, which allows people with incomes below certain thresholds to enter lotteries for the right to buy co-op apartments at below-market prices.

Three years ago, the co-op residents voted to make the buildings private, allowing owners to sell their apartments at market rates.

The Times reports about 250 vacant apartments have been  purchased by affluent buyers since the development was made private last year.

Mercedes-Benzes are replacing the run-down jalopies in the parking lots.

Despite signs of economic recovery across the country, the Phoenix-area housing market continues to be driven by foreclosures, according to the latest Realty Studies report from the W. P. Carey School of Business at Arizona State University.

Last month, almost two-thirds of the existing-home transactions in the market were either foreclosures or the resales of previously foreclosed-on properties,

The condominium/townhouse market was especially hit hard. The median price of condos resold in the Phoenix area in February is $95,000, the same as in January, according to the report.

Last year, the median was at $121,000. About 500 condos and townhomes in Maricopa County were foreclosed on this February.

"The fundamental problem remains that a weak recovery is restricting job growth that could impact the ability of property owners to maintain their homes, and a large number of adjustable rate mortgages are expected to reset in the coming months," Butler states.

"Further, owners, confronted with declining neighborhood values and restrictive debt amounts, could decide to walk away from their homes."

Rush Limbaugh, who has been and still is a radio program host, political commentator, author and television personality since 1967, says he continues to be fed up with New York City and is still selling his 10-room Fifth Avenue penthouse.

The problem is Limbaugh has found no buyers.  He is asking $13.9 million.

Limbaugh put his pad on the market in 2009 after New York Gov. David Paterson proposed a so-called "millionaire's tax" on residents who make more than $500,000 a year.

Limbaugh bought the lavishly decorated condo at 1049 Fifth Ave. in 1994 under the name of R H Trust, according to city property documents. The  5,000-square-foot property and two of its terraces overlook Central Park and its famous reservoir, according to CNN News.

Manhattan broker Corcoran Group is listing the property. For the tax rolls, the city values the property at $1.56 million. City officials speculate the property would rent for more than $26,000 per month.

Extell Ordered to Refund $15M in Condo Down Payments

The Wall Street Journal reports a  long-simmering dispute between Extell Development Co. and individuals who agreed to buy condominiums in one of the developer's new luxury Manhattan buildings  has ended. New York Attorney General Andrew M. Cuomo, ordered Extell to refund $15 million in down payments.

The ruling is a setback for the New York-based developer, which stands to lose more than $100 million in apartment sales, according to  a WSJ source.

It is also a potential embarrassment for the law firm Stroock & Stroock & Lavan, which prepared the offering plan for the building. The plan included a mistake that contributed to the ruling in favor of the buyers.

While Extell is unlikely to find buyers for the condos at the same prices today as it did near the peak of the boom, the firm's president, Gary Barnett, told the WSJ he was confident the building, known as the Rushmore, would attract buyers.

"We have already resold some of these units, and we are very confident they will continue to sell quickly," he said.

The ruling comes at a time when many New York condo buyers are trying to escape contracts that committed them to purchases made during the market's peak and that have fallen significantly in value, the WSJ reports.

Lawyers poured through documents and obscure laws in an effort to find something that would enable buyers to invalidate their contracts.

Most cases have failed to persuade the attorney general's office, which is tasked with arbitrating most of these cases, the WSJ reports.

The 41-story glass and stone building on the West Side of Manhattan, where condo units were sold for around $1 million to $7 million, is an exception.

Under state regulation, a developer is required to have a first apartment closing by the end of the stated budget year. In the offering plan for the 275 units, that date was listed as Sept. 1, 2008, and the first closing didn't occur until February 2009.

Extell has said the date was intended to be Sept. 1, 2009, and the documents contained a trivial clerical error. Attorney Richard N. Cohen, who represented a group of buyers, argued that the buyers relied on the date.

In its ruling, the attorney general said Extell "has provided no evidence that the parties intended a Sept. 1, 2009 date."