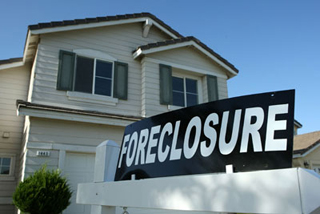 The filings include default notices, auction sale notices and bank repossessions. A glimmer of hope appeared in September when only 265,968 foreclosures were recorded, a 12 percent decrease from the previous month but still a 21 percent increase from September 2007.

"Much of the 12 percent decrease in September can be attributed to changes in state laws that have at least temporarily slowed down the pace at which lenders are moving forward with foreclosures," says James J. Saccacio, chief executive officer of RealtyTrac.

"Most significantly, SB 1137 in California took effect in early September and requires lenders to make contact with borrowers at least 30 days before filing a Notice of Default (NOD)."

Saccacio says September Notices of Default in California dropped  51 percent from the previous month. "That drop had a significant impact on the national numbers, given that California accounts for close to one-third of the nation's foreclosure activity each month," says Saccacio, a former turnaround specialist at Transition Management Group.

He says another example of lower foreclosure numbers in September is North Carolina.  Legislation was signed into law in August that requires lenders to provide homeowners and the state's commissioner of banks a 45-day notice prior to filing a Notice of Default. NODs dropped 66 percent in North Carolina in September.

"On the other hand, initial foreclosure filings in Massachusetts jumped 465 percent from August to September after being much lower than normal in June, July and August," Saccacio points out.

"That temporary lull happened after a new law took effect in May requiring lenders to give homeowners a 90-day right to cure notice before initiating foreclosure. But in September, about 90 days after the law took effect, initial foreclosure notices jumped back up close to the level we were seeing earlier in the year."

California alone accounted for six of the top 10 states with the highest foreclosure rates. Stockton took the top spot, with 3.69 percent of its housing units receiving a foreclosure filing during the quarter.

Stockton's foreclosure activity was down 9 percent from the previous quarter but still up 87 percent from the third quarter of 2007. Other California cities in the top 10 for foreclosure rate were Riverside-San Bernardino at No. 3, Bakersfield at No. 4, Sacramento at No. 7, Fresno at No. 9 and Oakland at No. 10.