Data through August 2008, released today by Standard & Poor's for its S&P/Case-Shiller1 Home Price Indices, the leading measure of U.S. home prices, shows continued broad based declines in the prices of existing single family homes across the United States, a trend that prevailed throughout the first half of 2008 and has continued into the second half.

"This started when Charlotte, NC, was the last region to turn negative back in April 2008. Both the 10-City and 20-City Composites have been in year-over-year decline for 20 consecutive months."

Blitzer says that of the 20 regions, 13 of them had their annual returns worsen from last month's report. 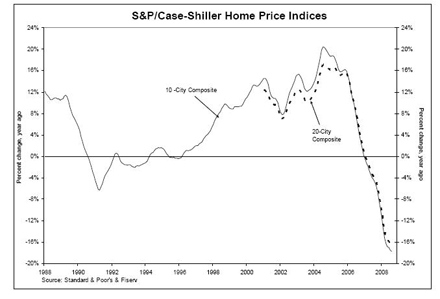 'As seen throughout 2008, the Sun Belt markets are being hit the most," the S&P researcher says.  "Phoenix and Las Vegas are both reporting annual declines in excess of 30%, and Miami, San Francisco, Los Angeles and San Diego are all in excess of 25%."

Dallas and Denver's streaks of four straight positive returning months ended in August. San Francisco was the biggest decliner for the month returning -3.5%. This worsened from its July/June return of -1.8%.

The S&P/Case-Shiller Home Price Indices are published on the last Tuesday of each month. S&P's Blitzer says they are constructed to accurately track the price path of typical single-family homes located in each metropolitan area provided.

Each index combines matched price pairs for thousands of individual houses from the available universe of arms-length sales data. The S&P/Case-Shiller National U.S. Home Price Index tracks the value of single-family housing within the United States.