(NEW YORK CITY, NY) -- Big names in the entertainment and leisure industries today struck a deal that could bring the state of New York $525 million in annual revenue.

"We are thrilled to be working with Caribbean CAGE LLC and Bob Johnson," says Jim Allen, Chairman, Hard Rock International. "Bob Johnson is a true global pioneer in media, music and entertainment, and we are ecstatic that Caribbean CAGE LLC will be an equity investor in the Hard Rock Casino Aqueduct development." 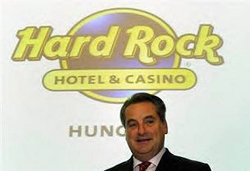 Considered one of the country's most successful business leaders, Johnson is currently chairman and founder of RLJ Cos. and majority owner of the Charlotte Bobcats of the National Basketball Association.  Previously, Johnson was the founder, chairman and CEO of Black Entertainment Television (BET).

"This is a great opportunity to partner with Hard Rock - one of the world's most recognized brands," says Johnson. "My background in entertainment, marketing and media makes this a perfect match.

"After working with Hard Rock for almost a year, I am very excited that Caribbean CAGE will be joining Hard Rock International and SL Green in the Aqueduct development. This is the first of what I hope to

be many future projects with Hard Rock International."

Robert B. Washington, co-founder, chairman and CEO of Caribbean CAGE LLC says, "We, at CAGE, are delighted to join this great team in creating a world-class project - the Hard Rock Casino at Aqueduct Racetrack."

SL Green CEO Marc Holliday added, "Working with our partners, we are planning a state-of-the-art gaming facility with additional attractions that will make it one of New York City's most popular destinations when fully completed."

As part of the SL Green/Hard Rock proposal, more than 2,000 Video Lottery Terminals are expected to be open by April 2010 and an additional 2,500 terminals would be open by 2011.

Additional plans include a Hard Rock Hotel, shops, dining and an entertainment center.