Specifically, property markets of Lahore, Karachi and Islamabad, which had registered increases in prices throughout 2013, were lukewarm during Q1 of 2014 with little buying and selling activity.

Zameen.com's statistics show that prices for plots and homes in Lahore remained largely consistent with only minute increases and decreases during the first quarter. Property values in Islamabad and Karachi, too, showed a similar trend, where key areas performed consistently in Q1.

No significant changes were noticed in the trajectory of rental prices across key areas of the three major cities. 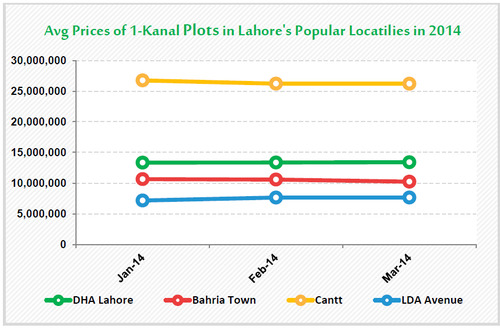 The property market for plots in Lahore had an uneventful first quarter. Compared to Q1 of 2013, demand seemed to have dropped significantly in Q1 of 2014, signifying that not many buyers or investors were active in the market. Consequently, there were no major spikes seen in property prices in Lahore.

In the first quarter of 2014, 1-kanal (500 yards2) residential plots in DHA Lahore showed a dip of 3.35%. Similarly, plots of the same size in Bahria Town registered a decrease of 3.93% in prices during the same period.

Homes in Lahore fared better than residential plots in terms of price appreciation, with 1-kanal houses seeing increases in value of 4.08% and 3.82% in DHA and Bahria Town respectively.

A comparison of average rents in DHA and Lahore Cantt revealed an interesting development on the rental front in Lahore. Cantt, which is generally a more expensive area to rent a 1-kanal home, lagged behind DHA during Q1 of 2014.

The average rental yields for 1-kanal houses in DHA, Cantt and Bahria Town were 4.27%, 3.83% and 4.11% respectively in Q1 of 2014. Meanwhile, helped along by some modest price appreciation and sharp increases in rent, Johar Town boasted a staggering 5.26% rental yield during the same period of time. Those looking to invest in houses for a steady stream of rental income should take note.

Property prices in Islamabad also had a bit of a dry spell in the first quarter of 2014. Most of the CDA sectors, which were very popular in 2013, did not manage to register impressive appreciation. In fact, some of the most notable areas registered a fall in prices. 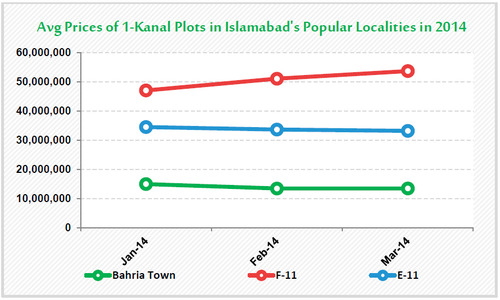 Bahria Town and E-11 exhibited a downward trend with a 4.85% and 0.61% fall in the prices of 1-kanal plots respectively. Interestingly, however, prices of same-sized plots in F-11 told a different story, registering an increase of 14.10% and providing further evidence that there was some upward activity in selective pockets of the Federal Capital despite a relatively sluggish market.

Rents for residential units of the same size hovered around the Rs 185,000 mark in F-11 during the first three months of 2014, and with increasing prices and steady rents, Zameen.com's data showed a gradual drop in the sector's rental yield.

One-kanal homes in G-11 fared slightly better in terms of rent thanks to steady, albeit minute, increases. The sector boasted an average monthly rent of Rs 171,889 in the first quarter and a steady 3.61% rental yield.

Karachi's real estate sector, which stole the limelight towards the end of 2013 with a flurry of activity and new projects, recorded a few dips here and there but largely remained on the up. 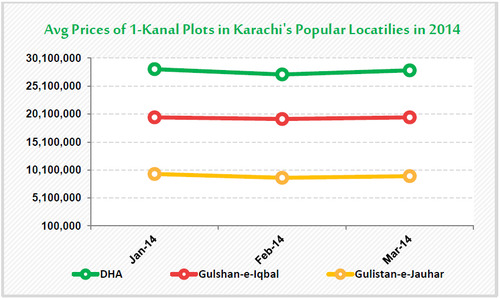 In DHA Karachi, 1-kanal plots registered a 6.40% rise in prices in the first quarter of the year. Even though this seems like a small percentage, translated into actual numbers it represents a tangible increase in prices for DHA properties.

Residential plots of the same size in Gulshan-e-Iqbal experienced no significant changes in the same time period, opening the year at an average price of Rs 19,500,000 and remaining steady till the end of the quarter.

Much like the plots, 500 yard2 houses in Gulistan-e-Jauhar recorded a 1.22% dip in prices. One-kanal houses in DHA Karachi also took a 3.11% blow to their values, but remained steady in terms of average rent and rental yield at Rs 174,047 and 4.04% respectively.

Barring a few, the older, more developed communities may not have done all that well in Karachi, but several of Bahria Town's projects in the city kept buyers and investors busy for the better part of the first quarter. Experts have opined that one of the reasons why the Lahore and Islamabad markets have exhibited bearish trends is because Bahria Town has attracted a large chunk of the overall investment.

Commenting on the current rates of plot files is difficult since they change every day, but what can be said with more certainty is that Bahria Town is showing the potential to become another successful project in the largest city of Pakistan.

Zameen.com CEO Mr Zeeshan Ali Khan believes that the market is likely to remain unchanged in the second quarter of 2014 except for a few select areas across the major cities where prices may continue to inch up. "The second quarter is likely to be a quieter period compared to last year, but we're expecting better activity in the third and fourth quarters of the year," he said.

Pakistan's property sector is one of the largest recipients of foreign remittances, and overseas Pakistanis coming home for Eid play an important role in fueling market activity. These expatriates, who contribute a sizable chunk of the total investment that goes into the country's real estate sector, could have a hand in propelling reviving the market as we head into the second half of the year.