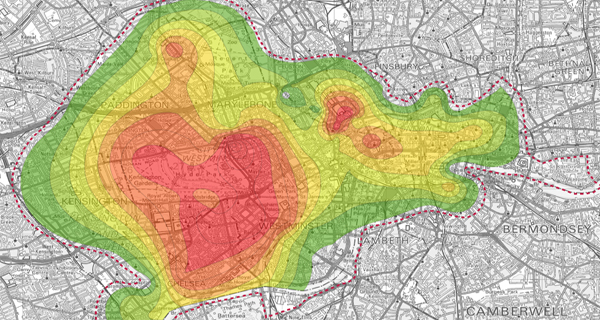 According to CBRE Residential Research, the £1,000 per sq ft price point, considered to indicate when new-build London residential property reaches prime territory, has rippled out from its traditional hub close to Hyde Park at a rate of around 1km every 8 years since 2000.

However, this symbolic value has not expanded uniformly across London due to the availability of land and the fabric of certain areas. The biggest push has been eastwards towards the City and the Southbank with Bloomsbury and Aldwych joining St John's Wood as new value epicenters.

Currently the £1,000 per sq ft price point only crosses south of the River Thames in the Southbank, but CBRE anticipates that areas such as Nine Elms and Battersea could hit this crucial benchmark in the near future along with Wapping and Whitechapel.

CBRE's Head of Residential Research Jennet Siebrits tells World Property Channel, "A decade ago the only areas achieving £1,000 per sq ft were those to the immediate south and east of Hyde Park, home to the famous 'monopoly board' areas of Knightsbridge, Mayfair and Belgravia. These areas now achieve nearer £3,000 per sq ft, double that in some cases, and the £1,000 per sq ft price point wave has rippled out to new areas.

"Most new-builds in inner London now achieve £1,000 per sq ft, but the wave has not rippled out in a uniform pattern. For example, it leapfrogged the mid-town corridor; prices in areas such as Soho lagged three years behind adjacent areas. The wave could continue to be disjointed going forward with places such as Wapping joining the group sooner than Whitechapel thanks to its desirable river frontage and superior infrastructure, even though the latter is closer to the edge of the current boundary." 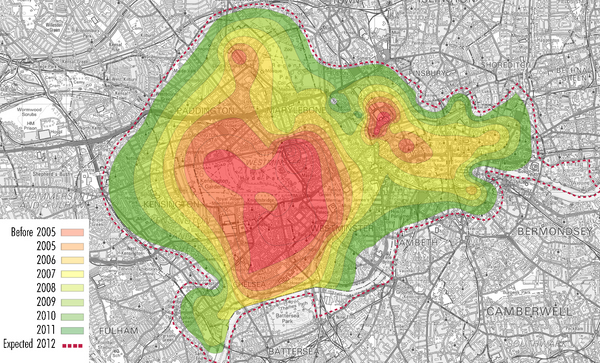