Actress Tries to Cast a Spell on a New Buyer 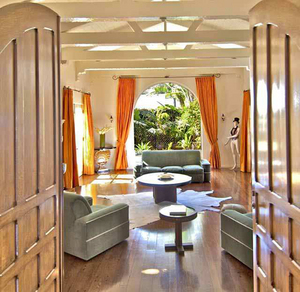 Actress Rose McGowan is hoping to charm a buyer with her Los Feliz home listed at $1,849,000.

The gated Spanish villa, built in 1928, has a grand baronial-style entry, a step-down living room with a vaulted beamed ceiling, peg-and-groove wood plank floors, arched windows and a coffered ceiling in the family room. The 4,278-square-foot house has four bedrooms and three bathrooms.

McGowan, who has a passion for Spanish-style houses, brought back the original character of the home by renovating the floors and fixtures.

Television audiences know the 37-year-old from her role as one of the witchy sisters on "Charmed" (2001-06). She stars in the "Conan the Barbarian" movie due this summer.


A Home Once Fit For a King 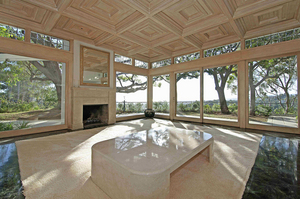 A gated compound once owned by rock 'n' roll icon Elvis Presley and wife Priscilla has come on the market in Beverly Hills for lease at $25,000 a month.

The French Regency-style estate, built in 1958, sits on a 1.18-acre promontory with city-to-ocean views in the Trousdale Estates area. Recently remodeled, the 5,367-square-foot house has new flooring, a new kitchen and laundry room, and a resurfaced pool and spa. Floor-to-ceiling windows and walls of glass lend an indoor-outdoor feel to the four-bedroom, five-bathroom home with attached guesthouse.

Handwritten tributes from fans of the King adorn the property's entry gate.


Taking Their Act to Valley Village

Actor Corbin Bernsen and his wife, actress and interior designer Amanda Pays, have purchased a 1936 Tudor in Valley Village for $900,000.

The home, which was on the market for the first time in more than 60 years, is in need of a complete renovation.

Bernsen and Pays, who try to bring back old homes' original grandeur, plan to do the same with this house. The three-bedroom, two-bathroom home has 2,415 square feet of living space and sits on a quarter-acre corner lot.


His Beat Goes on Elsewhere

Drummer Max Weinberg and his wife, Rebecca, have sold a Sunset Strip-area compound for $2.95 million, the Multiple Listing Service shows.

Sitting on nearly an acre, the Midcentury Modern home has clean lines and sliding walls of glass that disappear into pockets. The redone kitchen, with custom cabinetry and Miele appliances, is adjacent to a living room with 14-foot ceilings. The master bedroom and bathroom have dual poured concrete vanities and a wood floor. Three bedrooms and two bathrooms are in the main house, which connects by covered breezeway to the two-bedroom, one-bathroom guesthouse. The grounds include a swimming pool and a lawn with city views.


Ready to Flip Out by Sunset Strip

A two-home compound in the Sunset Strip area that was redone by Jeff Lewis of "Flipping Out" is on the market at $4,725,000.

Set on a promontory of more than a third of an acre with downtown-to-ocean views, the gated property has six bedrooms and 51/2 bathrooms. There are two swimming pools and parking for six.

The front house has an open floor plan and a deck that overlooks one of the pools. The rear house was redesigned for entertaining.

Lewis stars on the Bravo series in which he has purchased, renovated or designed more than 60 L.A.-area houses. The show was recently picked up for a fifth season.


Home Was Where Actor's Heart Was

Haley raised his two children in the Spanish-style house, which was the center of family life and social gatherings.