(Los Angeles, CA) -- "Two and a Half Men" star Ashton Kutcher has bought a home in the heart of the Hollywood Hills for an undisclosed amount. The house had most recently been listed at $10.8 million.

Kutcher had been leasing the property when reports surfaced that Justin Bieber had toured the house and might be an interested buyer. It can be weeks or months before the sale price appears in public records.

The three-story home has five bedrooms, eight bathrooms and nearly 9,400 square feet of living space, according to the listing. It sits on more than half an acre with a swimming pool and spa. Features include a gym, a sauna, a wine cellar and an elevator.

Kutcher, 34, will play Steve Jobs in an upcoming film about the late chief executive of Apple Inc. The actor starred last year in the film "No Strings Attached." 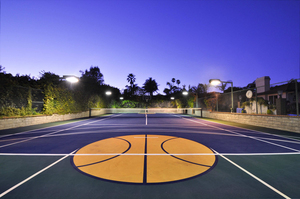 Former Laker Sasha Vujacic has put his ocean-view house in Rancho Palos Verdes on the market at $2.749 million.

The gated Mediterranean-style house, built in 1986 and remodeled, contains more than 4,000 square feet of living space on a single level.

Among the features are a terra cotta-paved courtyard, a double-door entry, high ceilings, a family room with a wet bar and wine cooler, two master suites, two additional bedrooms and a total of four bathrooms.

The nearly half-acre lot includes a swimming pool with spa and a tennis/basketball sports court.

The two-time NBA champion, 28, was a guard for the Lakers from 2004 to 2010, then moved to the New Jersey Nets until last year. He now plays for the Anadolu Efes in Turkey.


It's Time for Doc Brown to Travel 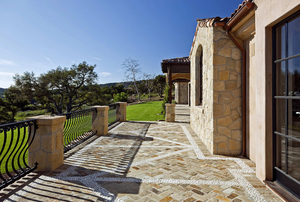 Actor Christopher Lloyd, who played a quirky scientist in the "Back to the Future" sci-fi trilogy, has listed his house in Montecito for sale at $6.45 million.

Lloyd built the Umbria-inspired country home after the house he had on the site was destroyed in a 2008 wildfire. "Great Scott!" to quote his character Dr. Emmett Brown.

The 5-acre site includes a pool, a spa, gardens, fountains, an expansive lawn and a boccie ball court. There are ocean and mountain views.

Lloyd, 73, is also known for his roles as Jim Ignatowski in the sitcom "Taxi" (1978-83) and Uncle Fester in the "Addams Family" movies. He has been cast in the upcoming ABC comedy "Only Fools and Horses."

The Emmy-winning actor is selling because he is downsizing and spending more time in New Mexico, according to listing agent Lisa Loiacono of Sotheby's International Realty.

To find out where the smart money is buying real estate these days, one need look no farther than the Hollywood Hills. Billionaire venture capitalist and hedge fund manager Peter Thiel recently cherry-picked a house there for $11.5million.

Thiel has a track record as a shrewd businessman, having been an early investor in Facebook Inc. He is the former chief executive and co-creator of PayPal.

The 1.25-acre property he bought is a rarity among local homesites; it has two driveways that lead to different streets.

Thiel, 44, owns other properties in Hawaii and San Francisco, where he is based. He will be teaching a computer science class at Stanford University, his alma mater, this spring.

The house was sold outside the Multiple Listing Service, marketed as a pocket listing.


Checking Out of Brentwood

Former model Nicole Murphy and football analyst Michael Strahan have parted ways with their house in a gated community in Brentwood in an all-cash deal for $6.15 million.

Murphy, 44, was married to comedian Eddie Murphy from 1993 to 2006. She will star in a VH1 show tentatively titled "Hollywood Exes," which is set to air this summer. The show documents five high-profile women in the Los Angeles area who are former wives of Hollywood A-listers or music icons.

Defensive end Strahan, 40, played for the New York Giants throughout his NFL career, retiring in 2008 after his team won Super Bowl XLII. He starred in the 2009 TV series "Brothers."

The property, which came on the market at the first of the year, was purchased for $5 million in 2009.