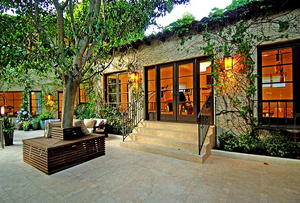 Comic actor Ben Stiller and his actress wife, Christine Taylor, have sold part of their compound in the Hollywood Hills for $7,325,000, public records show.

The entire property, listed at $12.5 million two years ago, included two houses and a one-bedroom guesthouse for a total of 10 bedrooms and 11 bathrooms on nearly an acre.

The couple sold a gated 1929 Spanish-style house of 5,334 square feet that had been restored and updated. Its outdoor courtyard and living areas, as well as the lushly landscaped pool area, are decorated with terra-cotta tiles and colorful inlays.

The second house, built in 1930 and also redone, returned to the market last month priced at $2,995,000. The 4,062-square-foot house sits on less than a third of an acre and contains four bedrooms and 4½ bathrooms. The master bedroom includes a dressing room with a "hair sink," according to listing details. French doors along the back lead to extensive outdoor terrace and deck areas with built-in seating around mature trees.


Host to Put an End to Idle Price Chatter 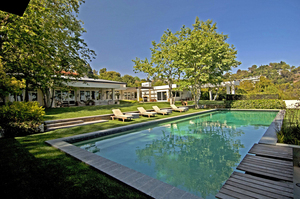 Talk show host Ellen DeGeneres has ended the speculation and revealed the price of her Beverly Hills estate in the Multiple Listing Service as $49 million. The property had been marketed since June on the Westside Estate Agency website as price "available upon request."

The four-structure compound was formed starting in 2007 through three property purchases on the same street. Among the sellers was Max Mutchnick, co-creator of the TV series "Will & Grace" (1998-2006), who sold his house for $29 million.

The 15,000 square feet of interior space in the compound include a 9,200-square-foot main house, two guesthouses and a three-bedroom house that can be used as office space or staff quarters. They sit on 3 acres of gated property with outdoor living spaces, a swimming pool, extensive gardens and koi ponds.

DeGeneres' 26-acre equestrian property in Thousand Oaks has been reduced to $14.9 million.

Listed in May at $16.5 million, the compound has eight farmhouse-style cottages, a yoga pavilion, a tennis court, stables and arenas. There are eight bedrooms and nine bathrooms in 7,000 square feet of living space.

DeGeneres married actress Portia de Rossi in a garden wedding at the Beverly Hills compound in 2008.


Suitable for Chairman of the Board 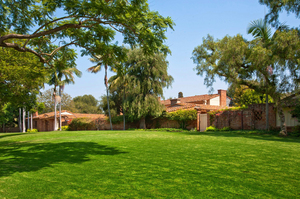 An estate in Holmby Hills once owned by Frank Sinatra is on the market at $23.5 million.

On more than 2 acres, the gated house is surrounded by expanses of lawn and mature trees. A large courtyard sits at the center of the hacienda-style home, built in 1936. There are seven bedrooms, seven bathrooms and 8,631 square feet of living space.

Sinatra, who died in 1998 at 82, won an Oscar for his supporting role in "From Here to Eternity" (1953) and entertained generations of music fans with hits including "My Way" and "Come Fly With Me."

A former home of actress Dorothy Dandridge has sold in the Hollywood Hills for $2,394,000.

The restored 1920s Mediterranean house includes three bedrooms, five bathrooms and 4,368 square feet of living space. There are arched doorways and windows, beamed ceilings and stained-glass windows. The master bedroom suite features a sitting area and dual bathrooms, one of which is circular. Three terraces with city views provide space for entertaining.

Formerly Jane Fonda's residence, according to listing details, the country English-style home of 3,787 square feet was built in the early 1950s. It sits on nearly an acre of wooded grounds with a detached office/guesthouse, a gym and a swimming pool. There are three fireplaces, seven bedrooms and three bathrooms.

Lauren Reichenberg of Extraordinary Real Estate in Los Angeles is the listing agent.