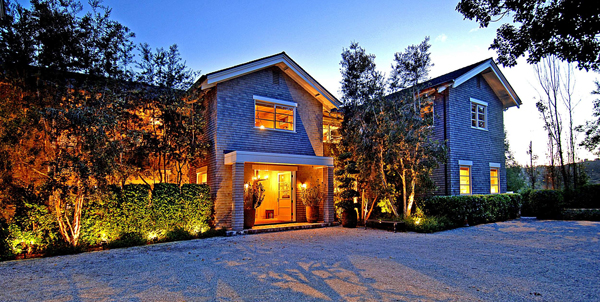 
(LOS ANGELES, CA) -- In one of the more talked-about transactions in town, actors Brad Pitt and Angelina Jolie have sold their Malibu beach house to daytime host and comedian Ellen De Generes for $12 million.

Pitt, 48, starred last year in the Oscar-nominated "Moneyball" and "The Tree of Life." He will star in the upcoming "Cogan's Trade" and "World War Z."

DeGeneres, 53, has hosted the talk show bearing her first name since 2003. She listed her Beverly Hills compound for sale last year at $49 million and recently reduced the asking price on her 26-acre equestrian property in Thousand Oaks to $14.9 million.


It Has His Seal of Approval

The desert retreat of former President Gerald Ford and Betty Ford has come on the market in Rancho Mirage at $1.699 million.

Set in the Thunderbird Country Club, the 6,316-square-foot mid-century home was built in 1979 and designed by architect Welton Becket. Among his works are L.A.'s Capitol Records Building, Pomona City Hall and Glendale City Hall.

The house sits on 1.37 acres with a swimming pool; a guesthouse described as a "Secret Service guard shack" is being sold separately for $509,000.


Sequel For Sale in Beverly Hills

The contemporary Mediterranean, built in 1985, occupies a half-acre lot with a guesthouse, a swimming pool and a cabana. The 9,200-square-foot house features a two-story foyer, a library with a wet bar, a theater with a wet bar, a gym and four en suite bedrooms for a total of five bedrooms and six bathrooms.

DreamWorks' "Kung Fu Panda 2" and "Puss in Boots" are nominated for Oscars.

Producer Katzenberg, 61, owns another Beverly Hills estate that he bought in 2009 for $35 million. 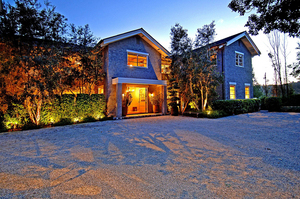 Entertainment industry executive Roger Birnbaum and his wife, Pamela, have put their Beverly Hills home up for sale at $15.75 million.

Completed five years ago, the nearly 7,200-square-foot contemporary farmhouse was a project of former talent manager and high-end remodeler Sandy Gallin. The Birnbaums bought the house from him in 2007 for $16.5 million.

The four-bedroom, five-bathroom house sits behind gates on close to a half acre with a swimming pool and gardens. The two-story living room has sliding-glass doors that open to a veranda. The master bedroom features a sitting room, gym and terrace with city views.

Birnbaum and Gary Barber co-founded the film production company Spyglass Entertainment in 1998 and are co-chief executives. They became chief executives of a bankrupt MGM more than a year ago.


Buyer Would Complete His Circle 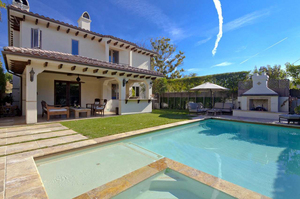 Guitarist-songwriter Billy Howerdel has his Studio City house on the market at $1.799 million.

The Mediterranean, completed in 2008, features 10-foot ceilings, formal dining and living rooms, three fireplaces, five en suite bedrooms and a powder room in its 4,000 square feet. Outdoor features include a kitchen with granite counters and barbecue, a patio misting system, a fireplace, a swimming pool and a spa.

Howerdel, 41, is a founding member of the platinum-selling band A Perfect Circle and the solo project Ashes Divide. The rocker has worked as a guitar technician for bands including Tool, Nine Inch Nails and Guns N' Roses.

The mid-century house, built in 1956, is known as Schindler's last commissioned home. The modernist architect died in 1953 at 65 without seeing the project completed.

The two-bedroom-plus-office house is entered through a first-level foyer. Original details include wooden sconces, room dividers, pocket doors, cabinets and other built-ins. There are 1 3/4 bathrooms.

Paul is only the second owner of the 1,258-square-foot house, which was built and named for its original owners, L.A. City College professor Philip Schlessinger and his wife, Phyllis.