Former "Two and a Half Men" star Charlie Sheen has listed his residence in Beverly Hills' gated Mulholland Estates for $7.2 million.

The Mediterranean mansion was designed for entertaining and is touted as having spacious public rooms, a screening room and balconies and terraces off the front. The 7,924-square-foot house, constructed in 1992, has five bedrooms and seven bathrooms. The grounds include an outdoor kitchen with a dining area, a swimming pool and a spa.

The actor, 45, was fired earlier this year from the CBS sitcom on which he had starred since 2003.

Public records show Sheen bought the property in 2006 for $7.2 million.


They're Hoping to Seal a Deal

Described as a "21st century Loire Valley chateau," the house sits behind gates on more than 4 acres. Features include a glass-enclosed wine vault in the dining room, a wood-paneled library and a master suite with dual bathrooms, walk-in closets and a sitting area with a two-sided fireplace. The more than 9,000 square feet of living space include six bedrooms and 91/2 bathrooms.

French doors open to a loggia. A tennis court and swimming pool are among the outdoor amenities. The pair had extensive work done on the grounds, including landscaping the long driveway leading to the mansion. 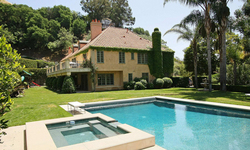 Klum and Seal are selling because their family has outgrown the house, said their listing agent, Lynn Teschner of Coldwell Banker, Beverly Hills South.

Klum, 37, also has been a star and executive producer of the TV series "Seriously Funny Kids" (2011) and "Models of the Runway" (2009-10). After 13 years as a model for Victoria's Secret, the former Sports Illustrated swimsuit issue cover girl is now the face of Astor, a European cosmetics brand.

Seal, 48, won three of his four Grammys for his hit "Kiss From a Rose," from the soundtrack to "Batman Forever" (1995). He shared his fourth this year in the pop collaboration with vocals category for "Imagine."

Public records show the property was purchased in 2005 for $7.6 million.


Liz Taylor's Place in the Sun

The longtime Bel-Air home of actress Elizabeth Taylor has come on the market at $8.6 million.

Owned by Taylor since 1981, the 1960s ranch house with a brick motor court sits on 1.27 acres. The 7,000-square-foot home features a wood-beam ceiling and wood-burning fireplace in the living room, which like a sitting room and the dining room, can access the pool terrace. A galley-style kitchen, powder room, a master suite, two other bedrooms, maid's quarters, an office and a bathroom with sauna complete the downstairs. A second master suite is upstairs, its walls upholstered in her signature color, violet.

The grounds include the pool with spa, terraced gardens, trails and a koi pond with waterfall. A hands-on gardener, Taylor had plants blooming year-round.

"She loved the eagle's nest quality of her bedroom, surrounded by nature and the contrast of the English flowers," her son Christopher Wilding said in a press release.

The 1935 cottage-style house, in the Warm Sands area, has three bedrooms and two bathrooms. Including a one-bedroom guesthouse, the property has 1,956 square feet of living space.

A flagstone-decked pool with a raised spa and the original flagstone barbecue are among outdoor amenities.

Jones, 56, conceived the Names Project Foundation's AIDS Memorial Quilt, which has grown to be the largest piece of community folk art in the world, and is the author, with Jeff Dawson, of "Stitching a Revolution: The Making of an Activist." He was played by actor Emile Hirsch in "Milk" (2008). The initial meeting for the film about slain gay politician Harvey Milk was held in Jones' Palm Springs house.


Former Clipper is Ready to Break

The Mediterranean-style home, built in 2005, is designed for entertaining, with French doors opening to a swimming pool, spa and lawn. Including the mountain-view master suite, the house has five bedrooms and 51/2 bathrooms in 6,208 square feet.

Mobley, 35, started his NBA career in 1998 with the Houston Rockets but, following a three-year stint with the Los Angeles Clippers, stopped playing in 2008 because of a heart illness. He had been traded to the New York Knicks but did not play for them.

Public records show the former shooting guard bought the house the year it was built for $3.65 million.

Sandy Feldmar and Jackie Feldmar-Cohenca of Teles Properties are the listing agents, according to the MLS.