The Midcentury Modern, built in 1960, is in the celebrity-populated "bird streets." The 6,500-square-foot post-and-beam house has a recording studio, a screening room and walls of glass opening to a pool, a 12-person spa and a fireplace. There are four bedrooms and seven bathrooms.

Christina Aguilera, 30, is among the world's bestselling recording artists with sales of more than 50 million records. The Grammy-winner's hits include "Ain't No Other Man," "Beautiful" and "What a Girl Wants." She is a coach on the TV singing competition "The Voice" (2011).

Public records show the pop star bought the property in 2003 for $5 million. She had listed it originally in 2008 for close to $8 million.

He's Changing the Dial in Venice

The contemporary Mediterranean and a detached studio open to a solar-heated saltwater pool with spa and drought-tolerant landscaping on the walled lot. The 3,030-square-foot home, built in 1994, has a two-story-tall living room, an underground wine cellar, an expansive roof deck with mountain views, two bedrooms and three bathrooms.

Schnabel, 64, was music director from 1979-90 at the radio station, where he started and was a host of the "Morning Becomes Eclectic" program.


His New Dis Fit for a King 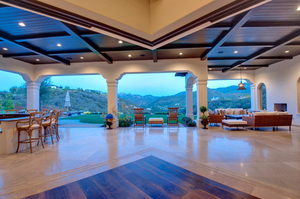 The Lake Sherwood house, completed in 2010, has 8,450 square feet on a single level. The modern Mediterranean features two offices, a temperature-controlled wine cellar, a home theater and a master suite with dual bathrooms and dual closets. There are five bedrooms and seven bathrooms. The 1.4 acres include an infinity pool.

Courtnall, 46, started his NHL career with the Toronto Maple Leafs in 1983 and retired from the Los Angeles Kings in 1999.

A guesthouse with a bedroom and bathroom sits above the three-car garage for a total of 9,450 square feet of living space. At nearly three-quarters of an acre, the gated lot has a pool with a sun deck and a motor court.

Bow, who died in 1965 at 60, was a flapper and sex symbol in the Roaring Twenties. Among her nearly five dozen film appearances were starring roles in the 1927 hits "Wings" and "It," earning her the nickname "The It Girl."

Update: TV personality and former model Cristina Ferrare and her husband, former ABC Entertainment President and Morning Light Productions founder Tony Thomopoulos, have sold their Wilshire Corridor condo for $2.8 million, the Multiple Listing Service shows. That's also how much they paid for the high-rise unit in 2003.

Designed for entertaining, the contemporary 3,277-square-foot unit has 10-foot ceilings, marble and hardwood floors, an open-plan living and dining room and a breakfast room. The master bedroom has dual bathrooms and three closets. The condo has three bedrooms and 3 ½ bathrooms total. Building amenities include a concierge and wine storage.