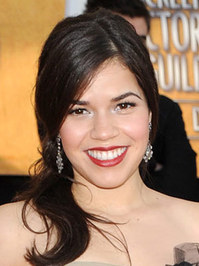 (LOS ANGELES, CA) -- "Ugly Betty" star America Ferrera is losing the braces, wrapping up her role on the ABC sitcom and moving on.

The actress, who plays a fashion-challenged editor at a style magazine, is relocating to New York for career reasons.

She has listed her Hollywood Hills house, with three bedrooms and 3 1/2 bathrooms in 3,427 square feet, at $1,599,000. The master bedroom suite -- with two walk-in closets, a corner fireplace and a large balcony -- and an adjacent loft-style office occupy the entire upper level of the home, built in 1993. The property has a swimming pool with a spa and mountain, canyon and city views.

The 1926 Spanish-style house has a wood-beam ceiling and fireplace in the living room, an arched doorway leading to the formal dining room and a second-story balcony with a period tile staircase.

There are three bedrooms and three bathrooms in 2,322 square feet. French doors open to a covered patio and a yard, which has a tiled pool with a spa.

A Beverly Hills house with a decades-long string of celebrity owners has come on the market at $15.9 million.

Designed by Roland Coate and built in 1934 for "Gone With the Wind" producer David O. Selznick, the traditional house has a two-story entry, a formal living room, a walk-in bar in the family room, library and dining room fireplaces, a billiards room, an office and two maids' quarters.

The dining room features original Greek keystone-shaped marble. Seven bedrooms and nine bathrooms sit in 12,600 square feet. More than three-quarters of an acre of manicured grounds include a swimming pool.


New owner for House of 'Shrek'

Producer David Lipman has parted with his Hollywood Hills home for $1.9 million.

The classic Midcentury house was designed by architect Merle Roussellot and built in 1961.

The two-bedroom, two-bathroom home, with fireplaces in the living room and master bedroom, has a swimming pool and sits on a hillside cul-de-sac. A courtyard entrance with a koi pond leads to 1,875 square feet of living space.

Update: Actor Jerry Douglas, known for his long-running role as "The Young and the Restless" patriarch John Abbott, and his wife, Kymberly Bankier, have sold their Los Angeles home for $2,075,000.

The two-story traditional house in the Encino section, built in 1951, sits on half an acre. It has five bedrooms and 5 1/2 bathrooms in 5,335 square feet.

Douglas, 77, has television credits dating to the early '60s.