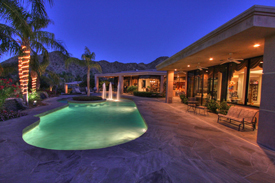 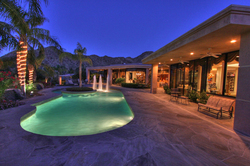 (LOS ANGELES, CA) - If Anne Rice can sell 100 million copies of her books, she should have no trouble with her residence in Rancho Mirage, Calif., recently listed for $3.3 million.

Built in 1995, the immaculate home has a formal dining room and living room designed for entertaining, six bedrooms, seven bathrooms and maid's quarters. It sits on more than an acre in a gated development. A detached two-bedroom guesthouse has a full kitchen and living room.

"The house has been a marvelous place to write, to entertain, to do interviews, and many reporters and camera crews have been in and out for various programs," Rice said. She worked there on her last three books -- the novel "Christ the Lord: The Road to Cana," the thriller "Angel Time" and a spiritual memoir, "Called Out of Darkness."

Rice bought the property in late 2005 and has added new flagstones in the pool area and rear pathways, fruit trees, oleanders, a fireplace in the den, new kitchen cabinets and large-screen televisions in the main house and guesthouse. "We've even air-conditioned the garage." 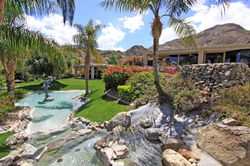 Rice, 68, is selling because she would like a smaller writer's retreat in the Coachella Valley.

Nevertheless, she said, "I've loved it here in Thunderbird Heights with views of the valley and the mountains."

The Riverside County, Calif., community might seem an unlikely place for the New Orleans native and author of "Interview With the Vampire" and other supernatural novels to live. But, she said, "it's been a lovely place to write."

Rice, who purchased the home in 2005 for $3.6 million, is realistic about changes in the housing market since then. She has priced the house at "a considerable sacrifice, due to the times," she said. "It's a good buy for someone wanting to relocate to this part of the valley."

The contemporary, built in 2001 in the community of Summerlin, Nev., has walls of windows and a massive fireplace in the two-story great room. There are golf course and mountain views, three additional fireplaces, three bedrooms, six bathrooms and 6,727 square feet of living space, according to Realtor.com. The attached garage has parking for four cars. The lot of more than 16,000 square feet includes a swimming pool and spa.

In poker tournament play, Ivey, 34, is ranked No. 1 among all-time money winners, with earnings of more than $12.8 million. He is considered the best player in the world by some industry observers, earning him the nickname the Tiger Woods of poker.


Preserving a Bit of L.A. History

Filmmaker and commercial director Joe Pytka has sold the Lloyd Wright-designed Taggart House in Los Feliz, Calif., for $2,335,000, according to the Multiple Listing Service.

Built in 1922, the Los Angeles Historic-Cultural Monument was restored and rebuilt in a five-year whole-house renovation undertaken with the help of the architect's son, Eric Lloyd Wright. Original details include leaded and art glass windows and redwood paneling. There are living and dining rooms, a breakfast room, a library/study, three bedrooms and three bathrooms in 2,255 square feet. The hillside lot has city views.

Pytka, 71, has directed thousands of commercials, many memorable branding campaigns and the Beatles "Free as a Bird" video. He also is owner of the Los Angeles restaurant Bastide. An avid restorer, he bought the property as a project in 2002 for $1,195,000.


Updated Home Has His Touch 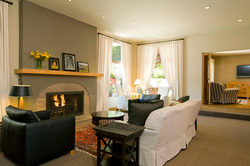 Double doors open to a courtyard with a tiled goldfish pool and a Buddha statue, sited according to feng shui practices. The contemporary home was built in 1964. There are three bedrooms, three bathrooms and 2,460 square feet of living space.

Update: Actor French Stewart, who played an alien on the sitcom "3rd Rock From the Sun" (1996-2001), and actress and interior designer Katherine LaNasa sold their renovated Hollywood Hills-area home in early March for $3,637,000, and now their buyer has resold it for $4,080,000.

That's a 12 percent increase. Even figuring agent commissions of 5 percent, those two months were profitable for the homeowner-turned-seller.

The 1936 traditional two-story house, on a third of an acre, has four bedrooms and five bathrooms.