'Dancing With the Stars' Co-host List Malibu House for $12.5 Million 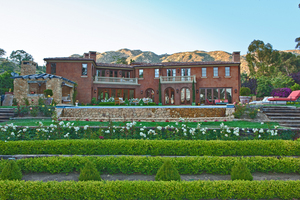 (LOS ANGELES, CA) -- "Dancing With the Stars" co-host Brooke Burke and actor David Charvet have put their Malibu house up for sale at $12.5 million.

Designed to evoke the south of France, where Charvet was born, the chateau-style home is in the Serra Retreat neighborhood. An 18th century fountain and sculpture courtyard sit outside the 6,769-square-foot house, which is reached from a gated stone driveway. More than three-quarters of an acre includes extensive lawns, a 200-bush rose garden, an orchard, a pool and a cabana.

Hand-plastered walls, hand-carved limestone and walnut flooring, imported French fireplaces and sculpted doors are among the details in the five-bedroom, 4-bathroom house. A hidden screening room, a 4,000-bottle wine cellar, a wood-paneled office and lower-level bonus room complete the residence.

Burke, 39, was the dance show's Season 7 champion and started hosting the competition in 2010. Charvet, 39, played Matt Brody on "Baywatch" from 1992 to '95 and starred last year in the TV movie "The Perfect Teacher."


Host Your Own Follies in the Hills

A Holmby Hills estate once owned by Ziegfeld Follies headliner and radio star Fanny Brice has come on the market at $65 million. The owners are Richard King of King World Productions and his interior designer wife, Lauren.

Originally constructed in 1938, the Hollywood Regency-style mansion was rebuilt and expanded over more than five years. The 2-acre property also has a guesthouse, a swimming pool, a pool house/gym and a lighted tennis court. The 17,000-square-foot house has eight bedrooms and 14 bathrooms.

Brice owned the home from the year it was built until her death in 1951 at 59. She was played by Barbra Streisand in the Broadway musical and 1968 film "Funny Girl."

King World, a television syndication company that is now part of CBS, brought "Our Gang" and Merv Griffin's "Wheel of Fortune" to new generations of TV viewers.

The Kings bought the house in 2001 for $15 million, according to Times archives.

The custom Mediterranean, built in 2002, has a two-story foyer, a hand-carved wet bar, three stone fireplaces, an office and a three-car garage. The 4,181-square-foot house has five bedrooms -- some used by Odom as closet space -- and five bathrooms.

A stepped terrace off the back of the house leads to a built-in barbecue area, a gas fire pit and a swimming pool and spa.

The two-time NBA champion, 31, bought the house in 2006 for $2.7 million, public records show. The east Manhattan Beach location is near the Lakers' practice center and the airport.

Edward Kaminsky of Shorewood Realtors, Manhattan Beach, had the listing, according to the Multiple Listing Service, while Paul Cooney of Shorewood, Redondo Beach, represented the buyer.


Still Turning Some Heads in Bel-Air

Built in 1928, the Spanish-style house includes a ballroom, a rooftop deck and enclosed sleeping porches. The 8,900-square-foot main house has six bedrooms and 71/2 bathrooms.

A newly built guesthouse with a bedroom and bathroom sits above the three-car garage. At nearly three-quarters of an acre, the lot has a pool and a motor court.

Bow, who died in 1965 at 60, epitomized the Roaring Twenties as a flapper and sex symbol. Among her nearly five dozen film appearances: starring roles in the 1927 hits "Wings" and "It," earning the nickname "The It Girl" and popularizing the expression.

Scott Tamkin of the Nest Real Estate Group at Keller Williams, Brentwood, is the listing agent.


An Opening in the Beverly Hills Area

Jay McGraw, an executive producer of several of his father's "Dr. Phil" specials, and his wife, former model Erica Dahm, have put their Beverly Hills Post Office-area home on the market at $6.25 million.

The Mediterranean, completed in 2006, is a 6,980-square-foot house with a two-story entry, five bedrooms and six bathrooms. The nearly half-acre property includes a cabana-covered outdoor living and dining room.

McGraw, 31, is the creator and executive producer of the Daytime Emmy-winning series "The Doctors" (2008-11). He is chief executive of L.A.-based Stage 29 Productions, which he founded with his dad.

A Los Feliz house built for civil rights attorney Ben Margolis, who defended the blacklisted "Hollywood 10" in the McCarthy era, has come on the market at $1,999,951.

Designed by Gregory Ain to emphasize indoor-outdoor living and constructed in 1952, the main house features clerestory windows and sliding walls of glass.

The 2,883 square feet of living space include four bedrooms and four bathrooms.

Ain is known for his Mar Vista Modernique development of homes built in the late 1940s.