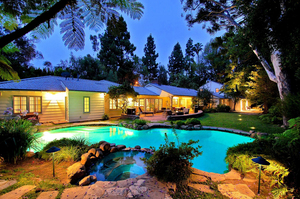 Try not to get too excited, but "Curb Your Enthusiasm" star Cheryl Hines and her husband, producer Paul Young, have put their gated Brentwood home on the market at $4,249,000.

The Mandeville Canyon-area estate, built in 1951, sits on about two-thirds of an acre with mountain views and a swimming pool. The renovated Cape Cod-inspired house has an open floor plan and was designed for indoor-outdoor entertaining. The detached guesthouse includes a kitchen. In all, there are six bedrooms, 5 1/2 bathrooms and more than 4,900 square feet of living space.

Hines has played creator Larry David's wife on the Emmy-nominated HBO comedy series since 2000. She is executive producer of "School Pride," an NBC makeover series premiering in the fall.

Young, of Principato-Young Entertainment, is an executive producer for the Fox comedy "Running Wilde," which will air in the fall. He and partner Peter Principato have produced an untitled feature film at Sony scheduled for fall release. 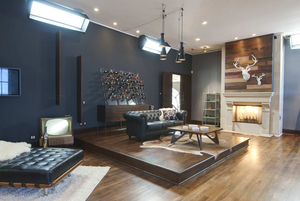 The gated Tuscan-style villa had been leased to the reality dating series, which premiered this month.

Designed for entertaining, the house includes a great room with a 28-foot-high coffered ceiling, a drop-down projector and a 15-foot retractable screen. The entry has dual winding staircases. A two-story guesthouse with indoor and outdoor fireplaces is adjacent to the swimming pool and spa area. The property has a total of nine bedrooms, nine bathrooms and more than 15,000 square feet of living space.

The motor court has parking for up to 100 cars.

The property is being marketed with two adjacent lots priced at $3 million and $1.5 million, for a total of 10 acres.

Ochocinco, 32, was a celebrity contestant this year on "Dancing With the Stars." He has played for the Bengals since 2001. In his show, he narrows down a field of 85 in search of a mate. Eighty-five is his uniform number and the inspiration for his last name, which he changed from Johnson.


Designer Rachel Ashwell, the creator of the Shabby Chic brand, has sold her Malibu cottage for $3.55 million.

The one-story home, behind the gates of Malibu Colony, has limestone flooring, a master suite with an office area and separate one-bedroom, one-bathroom guest quarters. There are four bedrooms, four bathrooms and 1,783 square feet of living space. A brick patio and spa are surrounded by gardens.

She bought the property in 2003 for $1.95 million, according to public records.

The one-story house, built in 1959 and described as contemporary Regency style, has been recently remodeled. It features French doors, dark wood floors and an updated kitchen and bathrooms. The canyon-view house has three bedrooms, 2 3/4 bathrooms and 2,247 square feet of living space.

Warren had the house priced a year ago at $1.95 million but ended up leasing it instead for $6,500 a month, the MLS shows. She bought the property in 2006 for $1.78 million, according to public records.


Rapper-turned-actor Alvin "Xzibit" Joiner has lowered the asking price to $650,000 on a Los Angeles house, which has been approved for a short sale, according to MLS details.